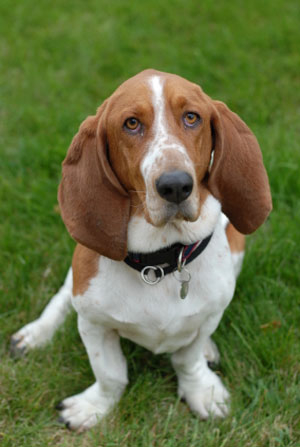 Life with a Basset Hound is a daily dose of humour, love and excitement.

Personality: Loyal and lovable, the Basset Hound is a constant source of pleasure due to its character and appearance. It loves company and gets very attached to its family. It likes to play and can be quite the comedian.

Favourite activities: Although it looks dopey, the Basset loves and needs a daily outing and enjoys nothing more than having a good smell of all the new scents in its neighbourhood. It will want to spend time with its family and usually enjoys the company of other dogs.

Suitable for: Families and those who do not mind a bit of slobber around the house. Being very heavy, the Basset can be strenuous to walk so unless you have time to take your dog on an outing yourself, think twice about this breed as it may be tricky leaving it up to the kids. Keep in mind the Bassets big bark and make sure this is kept under control if you live in close proximity to neighbours.

Backyard requirements: Being a scent hound, the Basset will pick up on a scent and follow it, so a well-fenced yard is a must.

Hereditary diseases: The Basset should avoid walking up and down stairs as this can damage its long back. Being overweight can also affect the back. This breed can develop eye and ear infections if those areas are not kept clean. Be very aware of bloat.

Life with a Basset Hound is a daily dose of humour, love and excitement. After living with two of these amazing pooches, Michelle Segal would find it difficult making the switch to another breed.

My son kept talking about a hole in his world There is a gaping hole, he would lament, and it can only be filled by a dog! My three children were desperate for a pooch to join our family. Truth be told, I was more desperate than they were, but my concern was that, being a dog-a-holic, I would lose interest in my family with a dog in my life. I was afraid I would love the pooch more than my own children!

Then one day I saw the ad Basset pups available from reliable breeder. I couldn’t resist. My husband had grown up with a droopy-eyed Basset called Samson who liked me on and off and was in total control of my husbands bedroom, ensuring he got the bed most nights while Daniel slept on the dog mattress alongside it but he was gorgeous, no doubt about that. And so we took the plunge. We piled into the car and drove out to see the four-week-old pups, although I secretly knew there was no way we would be leaving the breeder that night without ordering a little Basset.

I was wrong. We left the breeder that night having chosen two of the little mites, to the complete horror of my husband.

Four weeks later, when the pups had reached a healthy eight weeks, we made the trek back to the breeder to collect our new family members. Our lives were never to be quite the same.

Two of our three children are twins, so taking on twin pups was nothing new for us. The toilet training was somewhat different, I have to admit, but dealing with the needs of two pups at once came fairly naturally to us. We called our boy Crosby my husband insisted he be named after the musician David Crosby, whose sluggish look slightly resembled our new Basset pup while our girl kept the name Isabelle, which the breeder had given her. She was a definite Izzy.

I have to say that living with a Basset Hound is a rather unique experience. The breeds comical appearance their droopy, blood-shot eyes, never-ending ears that get into everything, rolls of irresistibly squeezable skin, and huge paws that look very nice in their ballet first position stance is something that never ceases to amaze. You never quite get used to their unusual appearance and every day it is a refreshing sight for the eyes.

The Basset Hound has a reputation for being droopy and dopey not entirely untrue, although to believe they can be left to sleep the day away is foolish. The Basset was originally bred to hunt and like most dogs today it loves an outing and should be exercised regularly to maintain fitness and keep its weight under control.

Talking about weight, you’d have to go far to find a breed more obsessed with food than the Basset Hound, and if you are not prepared to make sure every bit of food in your kitchen is put away or pushed far back on your counters, don’t get a Basset. Just recently, a dinner guest in our house put his plate of chicken on the dining room table, but when he popped back into the kitchen for a minute, Crosby casually helped himself to my guests plate of food in one gulp before we could even react.

Bassets love their tucker, but too much of it can be lethal. The Basset is very prone to putting on weight and its long body makes it susceptible to severe back problems should it get too fat. Its short legs will also have trouble carrying the extra weight. Similarly, this breed is at high risk of bloat. (See box.)

The Basset, which comes from the word low set in French, was originally bred in France and was used as a hunter of small animals such as rabbits. With great endurance and its strong sense of smell, the Basset would follow the animal, driving it towards the hunter. Despite its sluggish look, the Basset proved to be one of the most effective hunters of its day.

Because it worked in packs and closely with its hunter-owner, the Basset became used to being surrounded by its family and still today the breed gets very attached to its pack or owners.

Being pack hounds, Bassets like to be with their family or to be with another dog, says Janet Beckman, President of the Basset Hound Club of New South Wales. They do like company.

Beckman bought her first Basset Hound in 1962 and has been closely linked with the breed ever since.

At that time, Cleo the Basset Hound was starring on TV and the breed was very popular, she remembers. Cleo was followed by Fred Basset and then they were used in ads for Hush Puppy shoes.

Beckman emphasises the need for good fencing to cope with the Bassets amazing sense of smell second only to that of the Bloodhound.

They have a wonderful sense of smell and can wander, she warns. They do need good fences and it should always be remembered that Basset Hounds will follow an interesting scent if a gate is left open.

You wouldn’t imagine the adorable Basset falling into the category of good watchdog, but this breed has an unbelievably deep, loud, reverberating bark which can scare off just about anyone.

They are good watchdogs as they have a large bark, says Beckman. But usually they will be more interested in the smell of the visitor than anything else.

Prospective Basset owners should be aware of this breeds bark as a constantly barking Basset can cause trouble with the neighbours.

The best seat in the house

Vets often describe the Basset as a small big dog. It is deep-chested and very solid, weighing between 25-30kg, sometimes more. They can be very heavy to walk something you may not be able to leave up to the kids and if you are house-proud and like your dog to live inside with you, be aware that the Basset does shed and slobber with each drink of water.

But if you want an adoring hound which will make you laugh, make you feel like the most special person in the world each day, and give you pot-loads of affection, you can’t go past the Basset. As Janet Beckman says, They are very lovable, like the best seat in the house!

Daily: Make sure your Basset has fresh water and a balanced daily diet. It should be exercised each day to keep it healthy and keep its weight under control.

Weekly: Ears and eyes need to be checked carefully in this breed. The Bassets droopy eyes need to be wiped free of any debris and its ears, which are susceptible to infection, should be checked regularly for any buildup of dirt. Give your Bassets coat a brush each week to reduce shedding.

Monthly: Bath when necessary but always do so on a warm day as the Bassets coat is thick and takes a long time to dry. If your Basset spends a lot of time on grass, his nails may grow rapidly and will need to be clipped more often.

Other: Gastrointestinal worming every three months for adults, more frequently for puppies, heartworming and vaccinations. Check your dogs body during tick season, especially amongst the folds of skin, and apply anti-tick treatments if necessary.

This nasty condition is common in Basset Hounds and will occur when the stomach gets distended with air and twists, cutting off blood flow. Ways to avoid it include feeding two smaller meals rather than one big one; cutting food into small pieces; and feeding the dog at least an hour AFTER exercise or an hour BEFORE exercise. If your dog does get bloat, rush it to a vet immediately.

For information on breeders and clubs in your state visit www.ankc.org.au

For the Basset Hound Club of Victoria, visit www.geocities.com/Heartland/Ridge/9458/