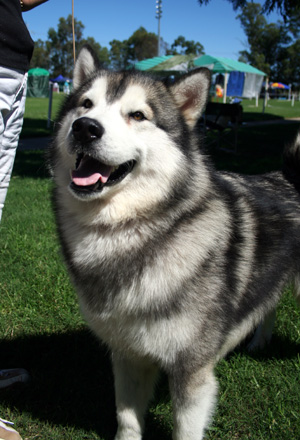 Personality: The Alaskan Malamute is highly intelligent, powerful and independent. They are a strong-willed breed and can be extremely stubborn at times, however, they are also friendly, sociable, fun-loving companions.

Favourite activities: This breed will love as much exercise as you can give it, thriving on activities such as swimming, agility, sledding and weight-pull competitions. Unfortunately, if they get bored, they will become frustrated and, therefore, destructive.

Watchdog qualities: The Alaskan Malamute can be aggressive towards other dogs, pets and livestock, but its friendly, sociable nature towards people means it is not the most avid watchdog. They probably look more intimidating than they actually are.

Hereditary diseases: Generally a very hardy breed, the Alaskan Malamute is prone to hip dysplasia, but no more than any other large breed of dog. They can also be affected by Chondrodysplasia (dwarfism) and a condition known as Alopecia X, also known as black skin or coat funk, which involves a varying degree of baldness and most commonly a failure of the outer guard coat to re-grow. However, purchasing your dog from a reputable breeder will reduce the risk of these problems.

As its name suggests, the Alaskan Malamute evolved in the Arctic regions and was shaped by the adverse weather conditions.

The Alaskan Malamutes sheer size and strength meant they were ideal hunting partners for big game, such as seals and polar bears and, therefore, a necessity for the native Inuit people, known as Mahlemuts.

Family-oriented, the Alaskan Malamute is friendly and sociable towards people, however its size and exuberance makes it an unsuitable playmate for children. This breed can also be aggressive towards other dogs, pets and livestock.

The Alaskan Malamutes fun-loving nature means that without regular exercise they can become frustrated and destructive, exhibiting behaviour such as digging and howling. Due to its Arctic origins, this breed has a thick, coarse, double coat, which comes in white, black-and-white, wolf grey, wolf sable (red undercoat with a dark grey outer coat) and red (often with dark highlights).

Relatively clean and odourless, the Alaskan Malamute tends to clean itself like a cat, so requires very little grooming and rarely needs bathing. Once or twice a year this breed will shed its undercoat completely, leaving only the outer guard coat.

A fascinating breed
President of the Alaskan Malamute Club of Victoria Inc., Ian Luke has been involved with the breed since 1991 and tells Dogs Life he was quite simply fascinated by the dogs.

Luke describes the Alaskan Malamute as a cross between a smart aleck teenager and a wolf – highly intelligent, stubborn, wilful and intent on pleasing themselves, yet capable of great affection, and at the same time pack-oriented and often with highly tuned hunting instincts.

Luke also adds that if they are not properly socialised as youngsters, they can be quite surly with other dogs. It is a breed most people should not own. It is a great breed for people who are active and who enjoy the outdoors. Being a confident person who can easily establish pack leadership is a must. If the owner cannot easily establish pack leadership, the dog will believe leadership has fallen to it and that’s when problems arise, he explains.

Luke says the Alaskan Malamute is not the sort of breed children should be left unsupervised with. Malamutes often play rough, so even the most well-behaved dog can hurt a child unintentionally.

Exercise is a daily necessity, at least half an hour walk a day, Luke says. They generally will not exercise themselves, but at the same time, if they are not getting enough exercise, they get bored. Once they get bored, they look for ways to entertain themselves, which usually involves large-scale excavations, significant damage to gardens and anything that can be chewed, and escape from the yard.

Some have deeply engrained desires to pull and work, and nothing short of harness work will satisfy them.
Luke says he spends the cooler months sledding, backpacking and entering weight-pull competitions with his Alaskan Malamutes.

Smart and cuddly
Another admirer of the Alaskan Malamute is Angela Knight of Woodstock in north Queensland, who has been a breeder for 13 years. Knight says she was initially taken by the breeds stunning looks and soft nature.

They are just like big, cuddly teddy bears and the closest thing I will ever get to owning my own wolf in Australia, she says. They are wonderful companions. With the time and effort put into them, they can learn so much and quite quickly. They are very smart animals.

A rambunctious puppy, this breed is great with children who are old enough to play with them. They generally mature into a dignified and mellow adult, who is friendly and definitely not suitable as a guard dog. Malamutes are happiest living outdoors, as long as they receive enough companionship, but they also enjoy living indoors with their human pack. Without attention, these dogs may become destructive nuisances.

Every Malamute is different, but I would say the favourite activities my Alaskan Malamutes enjoy are swimming and dinner time, Knight tells Dogs Life. I also think there are quite a few Malamutes that love attending the shows to strut their stuff.

They are quiet compared to most other dogs, but they like to talk to you with their yodelling and the occasional howl. They also enjoy digging, even in beautiful gardens.
Knight says that while most Alaskan Malamutes are good with children, like any breed, there should always be supervision. All my dogs just adore children and I always receive wonderful comments on the lovely temperament my dogs have, she says.

Needs serious training
Sydney veterinarian Dr Rob Zammit says the Alaskan Malamute is somewhat maligned as a big brute of a dog, but in practice he hasnt found that. Malamutes want and need to be trained and they like working, but they need to be dominated. Problems arise when people are not prepared to put in the time and effort, but want the status of owning a Malamute, Zammit explains.

He suggests a person who wants to be active with their dog should own a Malamute. They do require training and without that they will pull you all over the park, Zammit tells Dogs Life. They don’t suit a sedentary person and are not the sort of breed to mill around the house. If you buy them and stick them in a backyard, don’t expect them not to destroy things.

They are a big dog with a big brain and they will get into trouble very fast, and that’s why they are maligned. If a person is prepared to put in the effort and is serious about it, they are a good dog and form good relationships.

Daily: The Alaskan Malamute must be exercised daily to ensure it does not get bored. Fresh water and a well-balanced diet are also essential.

Weekly: This breed requires surprisingly little grooming, so a brush once or twice a week should suffice. Bathing is usually not necessary as their coat sheds dirt by itself.

Monthly: Like any other breed, the Alaskan Malamute should be treated for heartworm, ticks and fleas, and nails should be trimmed regularly.