DogsLife · Dogs News · Preparing Your Dog to Star in a Film

Preparing Your Dog to Star in a Film 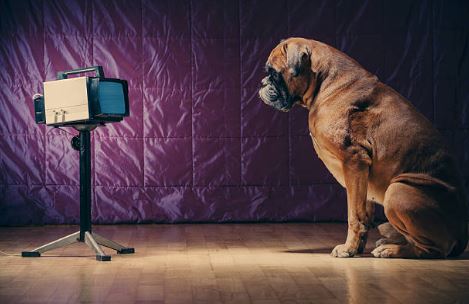 Want to see your dog on the big screen? Animal trainer and handler Peta Clarke tells us it’s important to have the right dog for the job.

It’s not every dog that loves the limelight. This is a really important thing to recognise as we move forward in looking for and ultimately selecting a dog for film and television work.

The main job of an actor of any species is ultimately to sell emotions to the audience. That can be anything from bliss to sorrow and a good canine actor (with the support of their trainer/handler) will be able to move (behaviourally at least) from one emotion to another easily.

Sometimes we train specific behaviours to sell certain emotions. For example, a common behaviour film dogs have on cue that pet dogs don’t is “head down”. This easily creates the feeling of sadness or loneliness for the director. A paw over the muzzle is great for a dog that needs to sell “embarrassment”. Verbal behaviours like “growl”, “big bark”, “little bark”, “whine” are all valuable in a film dog’s repertoire.

The thing is, though, unless a dog is comfortable on set with the lights, reflectors, booms, crew, generators, wind machines and cameras following them or sweeping in suddenly at them they are only going to look one thing and one thing only: uncomfortable.

A good example of this was finding a Chihuahua to perform in the live stage performance of Legally Blonde. Not only did I need to find one that looked the part, they obviously needed the confidence and Jack Russell!

I auditioned 26 Chihuahuas and Chihuahua crosses over the course of three months trying to find the dogs. Nervousness was a big problem. Any dog that runs and hides or barks defensively at a new person in their normal living environment probably would be terrified with the hustle and bustle of the theatre.

In the end, we found two brothers and a 1.5kg dynamo called Audrey who shared the stage for more than two years performing in eight shows a week, so it worked out well, but it took a lot of looking and then a lot of work establishing positive emotional associations with all the weird and wonderful things they would have to take in their stride. They were classically conditioned to curtains coming down and going up, orchestras tuning up and playing, choirs singing, people tap dancing right next to them, loud music, huge crowds and lots of other stuff. There was lots of playing tug and eating roast chicken as these things all went on.

Training the behaviours the dog needs to perform is actually the easy part. What most people wanting to get their dogs into this industry fall down on is conditioning positive emotions about the environment they have to do those behaviours in. If the dogs don’t feel totally confident and comfortable in and around a film set, all the best training of the behaviours in the world would be pointless.

So what if you don’t have access to a film set or have never even been on one yourself? No real problem. Have a look on YouTube for any “behind the scenes” videos so you can get a feel to start with. I have used aluminium foil hung up to get pups used to light reflectors and big cardboard boxes painted black being moved around to substitute for a camera. I’ve had ladders being dragged, the sound of small generators, fans in your dog’s face — seriously, anything and everything weird.

You can never overdo the conditioning of confidence for film dogs. But just remember, there has to be a pretty confident dog there to start — you can’t get blood out of a stone and pushing a dog into a situation that scares them is nothing short of cruelty.

While the foundation behaviours for a film dog are the essential behaviours for any dog (I’m thinking come when called, sit, lie down and, the big one, stay), the most important criterion a Hollywood dog can have is “at a distance from the handler”. I cannot tell you the number of dogs I have worked on set who are supposed to know “stay” that can only do it with the handler a metre away. That’s no good for film work.

On the first job my latest pup did for Telstra when he was five months old he had to play with a toy on a “down/stay” in a room without me! Your dog should be comfortable to stand/sit/down and then stay with you at a minimum of four metres away. There will probably be people, a camera and lights between you both.

You also may have to cue the dog at this distance in a very different position than simply standing in front of them. I have cued behaviours from another room over a microphone (out of sight), lying down on my side and tummy, under cameras and even between a cameraman’s legs. I have sat on men’s shoulders to cue the dog and get the correct eye line. I have cued my dogs on the back of a trike while they were in another car traveling beside me while we both travelled at 50km/h!

Distractions are a given — dogs will have to deal with kids running past, humans stepping over them, cameras whizzing past, huge wind machines, other dogs and animals. Train for everything you can think of and more. We have a saying in the industry: “There is no such thing as just a sit and stay.”

As far as behaviours to train once you have mastered the above with your dog, you can add:

That last one, go with another person, is a biggie. In most cases, the dog will be working with actors who are supposed to be their owners and so the sell of the relationship is important. It’s no use having a dog stare off to their handler on the side while the actor tries to work with the dog. Introduce the experience of working with new people early into their training.

Film dogs rarely need perfectly executed behaviours — in fact, more often than not, the robotic appearance of an obedient dog is totally not what the director will want. One of the best things a director has ever said to me was “your dogs are perfectly imperfect”. High praise for a film dog handler.

The human side of the coin

Finding yourself on a movie set with your dog, a pouch full of treats and all eyes on you is not for the faint-hearted. One of the most common problems on set are (I’m sorry!) owners.

I say this with all the love in the world for you and your dog. I know how exciting it is to be on a film set for the first time and how much fun it can be to be a part of it. But even the best trainer can fall apart under the pressure and newness of it and, if the owner falls apart, the dog is bound to fall apart too.

When you first go on set with your dog, you should be met there by one of the experienced trainers for the agency that got you the gig. I think it is vital to start off being represented by an agent. Having your hand held the first few times can be the difference between getting more work and never being asked back again.

Film and television are professional industries. This is not a fun day out for everyone else on set and nothing annoys a crew more than a dog that is being worked by someone who doesn’t know on-set etiquette and how a shoot works.

When it all comes down to it

I have six working dogs. Some get more work than others, but in the end all of them are family before they are work colleagues.

Getting a dog because you want to do film work is a big mistake. Get a dog because you want a dog. Do the work you need to do: the training, getting an agent you are comfortable with (and you should never have to pay to have your dog represented; agents will take a cut out of the pay when your dog works. If someone wants money up front, smile, wave and move on).

I see my job as being the interpreter between the director and the animal I am working for. While a lot of the job is working out how to get the “action” from the animal that is required — communicating to the animal what the director wants — just as important is communicating to the director how the animal is feeling and how we are best to set up the scene to have the animal comfortably perform what is required so everyone is happy. While it can be a little daunting (OK, a LOT daunting at times), I will never put an animal up for a job that I am not certain will enjoy the work, perform confidently and thus allow the clients to get great results.