NO to breed specific legistlation 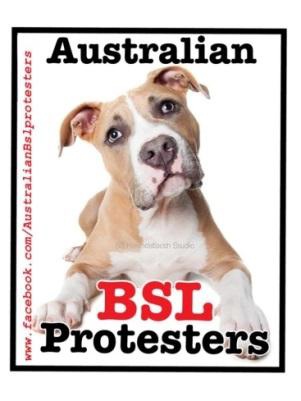 Hundreds of dog lovers from around NSW are expected to march from Hyde Park to Martin Place in Sydney on Saturday, July 13 to voice their NO to breed specific legislation (BSL), which has resulted in hundreds of family pets being killed by lethal injection in Victoria because of their appearance.

The Sydney rally has been organised by the Australian BSL Protestors group and is calling for animal management strategies that are scientifically proven to reduce dog bites to be introduced along with more education around responsible dog ownership. The rally is also part of a worldwide anti-BSL protest with Western Australia, Victoria, Queensland and South Australia also holding rallies on the same day.

Large dogs with a strong head and physique have been targeted because of a misguided belief they’re ‘pit bulls’ and the equally misguided image that dogs with a certain shape are potentially harmful. In fact, there are no genetic markers for ‘pit bulls’ as it is a ‘type’ of dog, not a breed.

“The reality is there are thousands of healthy, well-trained family pets who are at risk in Victoria of being seized and killed, not because they’ve done something wrong but based solely on their looks,” says Bobbie-Lee West of Australian BSL Protestors.

“It’s also wasted hundreds of thousands of tax-payer dollars in numerous court cases, several of which have seen the Supreme Court throw out Council accusations that specific dogs ‘look like they’re a bull breed,” she says. “Money which would have been better spent enforcing existing regulations and on education.”

The UK, Germany, Italy, the Netherlands and large parts of Canada and the United States tried similar Breed Specific policies and later repealed them due to their ineffectiveness and their animal welfare implications. During the 23 years Britain applied BSL, their bite stats went up 50 per cent – proof positive BSL doesn’t work.

“Countries that have repealed BSL in favour of science-driven animal management strategies today have extremely low incidences of dog bites and reduced animal destruction rates that are considered ‘no kill’,” she says.

Is your dog next?

Many people in the community also fear their dog will be next on the ‘dangerous dogs’ list due to the Council’s identification criteria of a pit bull type and the absence of DNA testing which leaves dogs misidentified.

“A dog merely has to look like a pit bull to be confiscated and then killed if they haven’t complied with Victorian Government regulations,” says West. “It is morally wrong to discriminate against any dog based on how it looks and dogs need to be assessed on an individual basis rather than by what breed it is. We need to educate people about owning these types of dogs and make the owners more responsible for their in-actions as a dog owner.”

Other organisations opposed to BSL include the Australian National Kennel Council (ANKC), Australian Veterinary Association (AVA), RSPCA NSW and Association of Pet Dog Trainers (APDT), as stated in their position statements regarding BSL on their website.

Location: Meet at 11am at corner of Elizabeth & Liverpool Streets (Hyde Park side of the street), then march down Elizabeth Street and into Martin Place amphitheatre for speeches.

The rally is based on peaceful protest and intelligent debate. It is an alcohol-free event and the organisers ask all participants to refrain from disruptive behaviour, including abusive language. Please also keep your dogs at home.

For more information or updates on the Sydney rally, visit the event Facebook page:

2 Responses to NO to breed specific legistlation