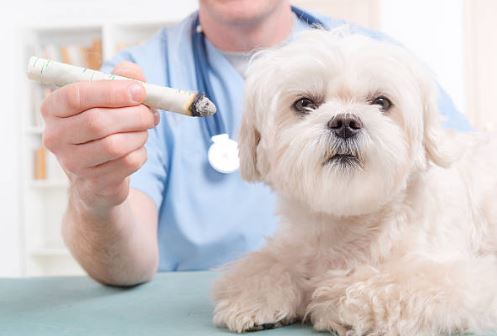 Chinese medicine has been used to restore health for thousands of years. Sophia Auld explores how it might be just what the vet ordered.

Pam and Allen Crampton were distressed to discover that the black cyst on their beloved Malamute’s hind leg was a cancerous mast cell tumour. While surgery successfully removed Maddison’s tumour and an affected lymph node, her prognosis wasn’t good.

The Cramptons were uncomfortable with the idea of chemotherapy so their vet introduced them to Dr Kaori Kanemitsu, a Western-trained vet who now specialises in Traditional Chinese Veterinary Medicine (TCVM).

They couldn’t be happier with the result. “From a death sentence, we have just celebrated three years of quality life with Maddi,” they say. “Our experience with TCVM has been astounding … To have been part of the whole cancer journey with our little girl under the guidance of Kaori has brought us much peace and confidence.”

Speaking to Dr Kanemitsu, known to her patients as “Dr KK”, reveals why she inspires such trust. The gently spoken Japanese vet is clearly passionate about her patients, having turned to TCVM out of frustration with the failures of western treatments.

“I had seen enough to say I’m actually euthanising fluffies because of the side-effects of medicine rather than the disease itself,” she says. “I started thinking, ‘Why do we do this? Is normal pharmacological medicine helping them or is it … killing them?’”

Dr Kanemitsu didn’t always feel this way; she admits to being sceptical about alternative treatments after completing her veterinary degree at the University of Queensland.

However, she remained open-minded, largely due to childhood experiences with the herbal remedies her Korean great-grandmother used to treat the family’s illnesses.

Her light-bulb moment was meeting Dr Huisheng Xie, a master TCVM practitioner from the University of Florida. “I thought, ‘This is it,’” she says. “That’s how I started to properly learn herbal medicine. Now I am a certified herbal medicine practitioner as well as a veterinary acupuncturist.”

Dr KK’s approach is truly holistic — treating the animal rather than the illness — and involves a detailed examination to determine the right course of treatment. “Finding the pattern of disease is very important for me,” she explains. “I need the whole picture, instead of just one clinical sign or disease name.”

She explains her approach with an example of two dogs diagnosed with mitral (heart) valve disease. In Western medicine, they would be treated the same way. But in TCVM, one dog might be described as “hot”, because it drinks more and has a bright red tongue. In contrast, the other dog might be “cool”, with a pale pink tongue. Because the illness pattern is different, TCVM would treat the dogs differently.

TCVM is believed to restore health by balancing energy flow (chi) through the body’s energy channels, or meridians. Once the pattern of disease is established, treatment will usually involve herbal medicine, food therapy, acupuncture and tui na (Chinese medical massage).

The Chinese herbal medicines are given as a formula, with herbs that work synergistically to achieve healing with a minimum of side-effects. Acupuncture is performed regularly and owners are taught how to apply acupressure and Chinese medical massage at home.

For Maddi, treatment involved twice-weekly acupuncture, Chinese herbs and some modifications to her already healthy diet, including super foods like quinoa, red kidney beans, sweet potato and salmon. “Maddi had a menu the envy of many humans,” the Cramptons quip.

Bella, another of Dr KK’s patients, was diagnosed with osteosarcoma of her right wrist at age five. Bella’s owner Eileen Marini explains that this cancer has a poor prognosis, even after amputation, with a life expectancy of about four months.

“I did a lot of crying as Bella is one of those special dogs that you have the privilege of sharing your life with,” Marini says. After surgery to amputate the affected limb, Marini decided against chemotherapy due to its potential impact on the Boxer’s quality of life.

She chose to use TCVM instead and for four years has continued Dr KK’s regime of a mostly raw diet, regular acupuncture and daily Chinese herbs. “TCVM gave us hope when the prognosis was so poor. Not only is Bella still alive almost four years from diagnosis but she also has quality of life. She is a happy Boxer — just with three legs instead of four.”

Another one of Dr KK’s patients, Gemma, suffered a devastating spinal injury, leaving her incontinent and unable to walk. Her owners, Matt Christie and Penny Clarke, were reluctant to put their 16-year-old Dachshund through the $10,000 operation that was recommended.

Dr KK provided advice without offering false hope. “For Gemma, it was definitely an excellent option,” Christie explains. “As the inflammation subsided, muscles were managed [with] KK’s guidance by combining acupuncture and massage treatments … and she was able to walk again.”

If you’re considering TCVM for your furry friend, Dr KK emphasises the importance of finding a qualified practitioner, which means someone who has done significant training. “It’s very important to get those qualifications,” she says. “It’s not just a name on paper.”

Nor is she against Western veterinary medicine. Rather, she highlights the value of an approach integrating TCVM and Western medicine. “I think integrated medicine is the best medicine, rather than just one. Knowing two is a bonus.”

DOGSLife recommends consulting your local veterinarian if your dog displays any evidence of ill health and proceeding according to their advice.