Hugging Can Make Your Dog Annoyed? 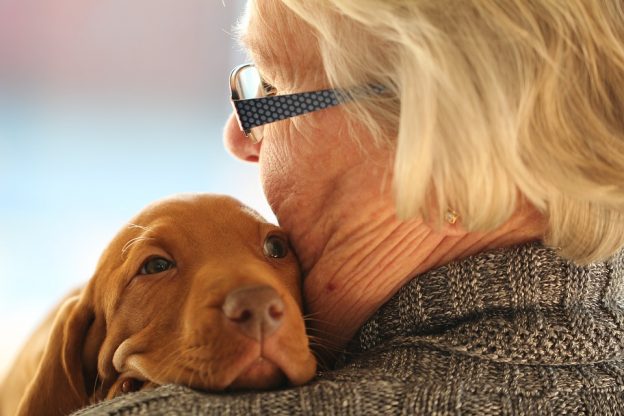 Could some of the things you do every day be a source of constant annoyance for your dog? Tim Falk finds out.

Do you ever get the feeling that your dog sometimes finds you a bit annoying? Does your pet ever roll his eyes at you or seem impatient when you’re slow to grasp whatever it is he’s trying to communicate to you? If you answered yes, you’re probably not alone.

Although much of the focus in dog training is on the behaviour of our pooches, sometimes it’s the behaviour of their owners that’s the source of some problems. While our knowledge of canine behaviour is increasing all the time, sometimes we can be a little slow to put that knowledge into practice when dealing with our four-legged friends. In fact, some of the things you do every day without even a second thought could be driving your pet to distraction.

“It is important we understand our dogs so we can then work with them rather than against them,” says Chiara Perri from Point Cook Dog Training. “Dogs are living creatures and they will have their own wants, desires and dislikes — just like humans — and we need to respect that. If we try to force dogs to do something they don’t like, we then face repercussions such as anxiety, fear, reluctance, resistance and even aggression.”

Overall, the trainer believes that dog owners around Australia are getting better at understanding their dogs’ emotions and thoughts. However, outdated training methods can still confuse people about how to interpret their pet’s behaviour. “As an example, there are some people and trainers who believe that when a dog jumps on you it is trying to dominate you, when in actual fact it is just looking for attention,” says Chiara. “Owners must also be careful that they don’t anthropomorphise the interpretation — that is, conveying what they feel onto the dog. When trying to interpret how a dog feels, always look at the body language, the general behaviour and the demeanour of the dog.”

Cat Saunders, a trainer from The K9 Company in Victoria, says understanding your dog’s emotions may help prevent aggressive behaviour as you will be able to determine if your dog is stressed or fearful. “When we can understand our dog’s behaviour and body language, it helps them in their ability to communicate with us, especially when it comes to what they like and don’t like.”

So what are some of the common things owners do that drive their dogs crazy?

Hugging is one of the key ways we show affection, and when your furry friend does something adorable it’s so easy to reward her with a big bear hug. Unfortunately, hugging isn’t comfortable for all dogs. .

“Dogs don’t really like being restrained and confined in the form of hugging. This can make them feel threatened and ‘trapped’ with no option to move away,” Cat says. With this in mind, it’s essential to always be observant of your dog. Does he move forward and “ask” for the pat and affection or does he try to pull away?

“As with people, some dogs have a bigger personal space bubble than others. It’s simply a case of learning to read each dog’s preferences when it comes to showing them affection,” says Cat. According to Chiara, many dogs dislike hugging because in their dog world, a hug is a direct threat. Dogs don’t jump on top of each other and restrict movement unless they are bullying or threatening. But, with time, dogs do learn that when we’re hugging them, it is affection and not a threat.

“To teach this to dogs, owners can start by gentle handling and touching, giving the dog treats for being tolerant and patient,” explains Chiara. “Then the owner can progress to holding and hugging and being calm and reassuring. If the dog struggles, the owner needs to slow down the training process. By teaching dogs to be more tolerant or even like hugging and touching, we can greatly reduce the incidence of the dog panicking and biting when being held.”

Have you ever stopped to listen to some of the commands you give your dog? Are they short, sharp and to the point or does everything you say come out as a lengthy speech? If it’s the latter, it can be a source of significant confusion and frustration for your dog.

“Dogs have a vocabulary of up to 200 words and when we speak they will only understand specific cue words that will have been taught to them. Too many words will just confuse your dog and teach it to tune out,” Chiara explains. Cues should be simple and clear, something your dog understands, and that can be reinforced with food, praise or play. Speaking to your pooch as if he’s a tertiary-educated adult will only cause problems. “Instead of saying ‘Can you please sit down for your treat’, it would be easier for your dog to understand if you just said ‘Sit’ and then rewarded the action,” says Cat.

It’s also important to remember that your dog will not know the meaning of your words unless they are taught first. “As an example, there is no point calling your dog and saying ‘come’ if you have not taught it that the word refers to the dog running to its owner,” Chiara says. “Teach the dog one word at a time that relates to a specific behaviour and reinforce it. Your dog will soon join the dots and repeat the behaviour. Once this becomes fluent, you then move into a new word.”

Even the most patient of people get frustrated sometimes. And when your usually well-behaved dog just won’t cooperate and almost seems to be misbehaving just for the fun of it, tensions can reach boiling point.

But yelling at your dog won’t help. “While dogs are amazing creatures, they don’t and will never understand the complexities of highly stressful human emotions and yelling,” says Cat. “Dogs like to be able to predict our behaviour and yelling can be filled with mixed signals for dogs and can often frighten them, or cause them stress at the very least.”

Chiara also points out that dogs may relate yelling with being punished, especially if they then got smacked. “Yelling becomes a negative association and you might find that when you yell, your dog moves away from you,” she says.

So the next time you’re reaching the end of your tether, take a deep breath and keep a lid on your emotions. “Always remain calm around your dog. And if you’re having a party where it may be loud and boisterous, your dog may prefer to be in a separate, quiet area,” advises Cat.

The next pet peeve for our canine friends is inconsistency. Take a minute to think about how consistent you are with the rules and boundaries you set for your dog. Are they always constant and adhered to, or do you let your pooch bend them a little when he’s being especially cute? Does each member of the family make sure your dog sticks to the same rules, or does he know he can push the envelope a little further with certain people?

Unfortunately, consistency can be downright confusing for your dog. “Dogs love predictable outcomes and they feel happier and more relaxed because they know what is coming and what is expected of them. If owners are inconsistent, it creates confusion, anxiety, uncertainty and unruly behaviour,” Chiara says.

Dogs will also continue a behaviour if there is reinforcement for it, so if one person doesn’t like jumping but another allows it, your dog will always continue to jump because it has the opportunity to do it occasionally. “Think of it like a pokie machine: if you get the occasional jackpot, you get addicted to perseverance,” Chiara says.

Try to be consistent with your dog at all times. Draw up a plan and stick it on the fridge so the whole family is united in the training. Tell your visitors what you expect them to do and set your dog up to succeed by reinforcing what you want as often as you can.

Is your dog left home alone for long stretches of time? Do you struggle to find enough hours in the day to spend with your pooch? Chances are she doesn’t like this situation at all.

“Dogs are extremely social animals and they live in family units; they are not solitary animas so they crave attention from their owners,” Chiara says. “If you know you are going to be out all day or work long hours, consider other options such as dog day care, a dog walker, play dates with another dog, having someone pop in to visit your dog, environmental enrichment so your dog has something fun to do while at home alone all day, another dog friend or even allowing your dog to be inside so it can still surround itself with the owner’s smell.”

But the most important thing you can do is to give your pet as much attention and interaction as possible. Dogs thrive on human company. Make sure that when you spend time with your dog, it’s quality time, Cat advises. “Play games, do some training or teach them some tricks. We all know how smart dogs are, so spending time with them where they are learning with and from you is wonderful time spent with your dog.”

Chiara Perri says it’s vital to understand what your dog does and doesn’t like. “We need to work with what they like and teach them what we like by using gentle training methods where positive reinforcement is the key element. It is also very important that we understand the difference between not liking something and being very fearful or phobic of it,” she says.

Training to help overcome either of these issues will be quite different depending on the circumstances, but should always be done with a gentle and force-free approach.