How to Teach Fetch the Correct Way 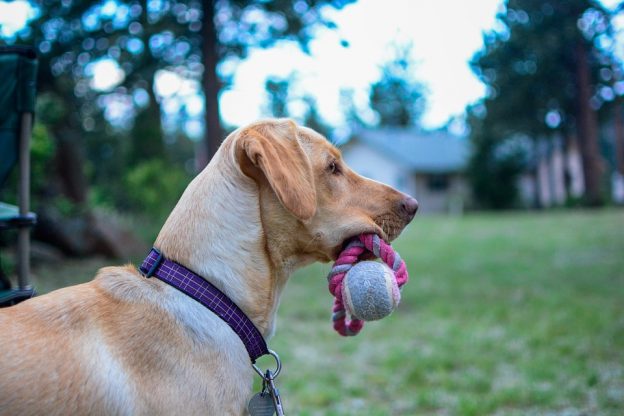 Fetch is a simple game loved by pooches and their owners alike. Danielle Chenery provides you with the steps to get started and a few extensions for those who’ve already mastered the game. Dock diving, anyone?

One of life’s simple joys is taking your dog to the local park for a game of fetch. Best of all, it’s up to your pooch to do most of the work, so it’s a great way to tire her out while preserving your own energy.

When you first get started, it’s all about the rewards. Dr Eloise Bright from Love That Pet says fetch is best taught at close range. “Give your dog a toy or ball to put in his mouth, then encourage him to swap it for a treat (the ‘give’ command). Then take a step back and encourage your dog to take a couple of steps towards you to ‘give’ the toy in exchange for a treat,” she explains.

Next, continue with more steps backwards. “Once you have taught ‘give’, you can throw the toy and most dogs will bring it back to you,” Dr Eloise says. “Try not to engage in tug of war or chase your dog at this point, or it could turn into a totally different game. If your dog is reluctant to give up the toy and prefers to chew it, it can help to use two balls alternatively.”

Sydney-based dog trainer and behaviourist Alisa Sannikova takes the opposite approach. She actually recommends starting with a tug toy, such as a tennis ball with a rope attached, and encouraging your dog to grab it and play tug with you. “This is also a good time to encourage your dog to drop the tug toy by waving some food or a different toy near his mouth and then, as a double reward, let him go straight back to playing tug with you once he’s released it,” she says.

“When you’re having lots of fun playing tug, your dog releasing the toy and then grabbing it from you again, you’re halfway there. Now you can start letting the dog ‘win’ at tug and see if he’ll bring the toy back to you to keep playing. Try to play in a small space, to reduce the chances of the dog running a big victory lap with the toy. When you toss the toy a mere 10cm away from you and your dog grabs it and brings it back for more, you have just played a (very small) game of fetch. All you have to do now is label it with the word ‘fetch’ and start practising with longer toss distances, a few centimetres at a time to start, until your dog gets confident.”

Dogs are clever little creatures and they soon learn having their owner chase them for the ball is much more fun. “I also often see dogs drop the ball a distance away and then the owner end up ‘fetching’ the ball,” Dr Eloise says. “If your dog has learnt some bad fetching habits and you are doing more running around than them, go back to teaching ‘give’ by swapping a toy/ball for a treat at close range. It can be best to teach this at home where there are few distractions while using low-value items, rather than the ball that your dog is used to chewing and running away with. Then, gradually build up the distance, complexity and distraction level.”

A spokesperson from the Animal Welfare League Qld says it’s important to phase out using treats to entice your dog to return the ball as soon as possible. “The real reward is the chance to fetch the ball and retrieve it,” she says. “Match the length of training with your dog’s level of interest. And if your dog barks while waiting for you to throw the ball, make her wait until she is quiet before proceeding.”

Whatever you do, enthusiasm is key, Anna says. “Playing fetch should be fun and it’s important to enjoy teaching it, too. Don’t use objects that are slippery or too hard for a dog to grab and don’t toss the object too far at first, to ensure your dog doesn’t get confused,” she says. “It’s important to end the play session a little early, when your dog is still excited for more, rather than tiring your dog out and having your dog’s last memory of trying to fetch being one of boredom. And don’t forget to laugh if your dog does something silly.”

If you’ve mastered the art of fetch, dock diving is a fun extension of the game. “Dock diving is another great ‘fetch’ where dogs dive off an elevated platform into the water in pursuit of something thrown into the water,” Dr Eloise explains. “Teaching your dog to find something and bring it back is a good extension of fetch. This can be taught by showing your dog a toy, then placing it in a cardboard box in front of them so they have to ‘find’ the toy and bring it back for a treat. You can then gradually introduce multiple boxes and hiding places. You could even teach your dog how to find your keys.”

Canine disc and flyball are other great extensions of Fetch. “These games can change up your experience and really keep your dog enjoying fetch. They can also be a fun challenge if you’re the competitive type. They are all based on fetch, but need some additional work,” Anna explains. “For canine disc, you need to teach your dog to grab the edge of a Frisbee disc by rolling it on its edge to start. For flyball, you want a dog that loves to fetch tennis balls and bring them back in a straight line over a small jump. Meanwhile, for dock diving, you want your dog to be happy splashing into some water that you’ve tossed the toy into.

“Flyball and dock diving need some specialised equipment to do properly, so look up any local clubs or gatherings for these sports to learn more. And don’t forget to check with your vet before you get into any intense dog sports, in case your pet has any potential issues you need to be mindful of such as joint problems or a risk of overheating.”

Playing fetch-based games are great for your dog’s mental and physical stimulation and offer the chance for you to spend some quality time with your pet. These types of activities also engage your dog’s natural retrieval instincts and are a great way to tire out a dog with excess energy. Changing the types of fetch games you play together will keep your dog interested and entertained, so get outside and get fetching with Fido.

The steps to fetch