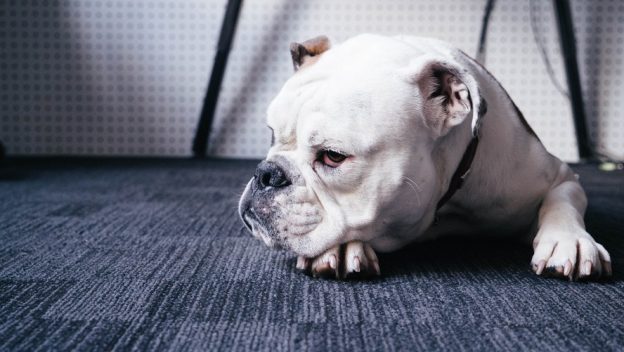 Carrol Baker looks at hypothyroidism, an often-misunderstood condition in dogs that can be managed when diagnosed properly.

Have you noticed your dog gaining weight? Does your pooch seem listless, or very sleepy? Or is its coat looking dull and patchy? If any of these symptoms apply, your dog might be suffering from hypothyroidism or thyroid disease.

There are two types of hypothyroidism, the first is acquired hypothyroidism, which can occur from around four years of age. This type is more common in mid to large breeds such as Golden Retrievers, Dobermans, Great Danes and Boxers. The other type, congenital hypothyroidism, is far less common — dogs are born with it and it can cause dwarfism.

So how does a dog end up with acquired hypothyroidism? Dr Matthew Best from Brisbane Veterinary Specialist Centre says in half the cases, the immune system attacks the thyroid gland and stops it from doing its job. “The other half has atrophy of the glands, meaning the thyroid tissue wastes away over time.”

The end result of either scenario is the same — the body produces less thyroid hormone, so the bodily functions that rely on this hormone won;t work properly. The thyroid gland is controlled by the hypothalamus and the pituitary gland. It’s designed to manufacture a number of hormones including T3 (liothyronine) and T4 (levothyroxine).

According to Dr Matthew, the reduction of these hormones can have a dramatic impact on a dog’s health and wellbeing. “It’s a key player in a dog’s metabolism, affecting almost every cell in the body,” he explains. “If undiagnosed, hypothyroidism can significantly compromise a dog’s life and can be life threatening.”

An affected thyroid will impact on many parts of the body, so the symptoms are varied. A dog might have decreased exercise tolerance or become constipated, while an extroverted dog might become withdrawn. Dr Matthew says some symptoms can be quite unusual. “There can be neurological side effects, ranging from peripheral nerve problems similar to Bell’s palsy, right through to having seizures.”

The most common indicators, however, are lethargy and weight gain, and changes in skin and coat quality. “There can be loss of fur from both flanks, and the tail and skin will appear scaly and dry,” Dr Matthew says.

Hypothyroidism affects around 0.5 per cent of dogs and it’s tough to diagnose, as the symptoms mimic those of other conditions. This, according to Dr Matthew, is a real problem.

“It’s one of the most over-diagnosed conditions in veterinary medicine because it’s a challenging disease to definitively diagnose,” he says. “For example, a dog that is overweight can often be diagnosed as having hypothyroidism, but it may not be the case at all — the dog may just be eating too much.”

To determine hypothyroidism, a vet needs to run a series of blood tests. The first is total T4, and if the results from the test indicate the levels aren’t low, this excludes hypothyroidism. However, if it’s low, it doesn’t prove conclusively that the dog has hypothyroidism. “Lots of dogs can have low total T4, particularly sighthounds, and other health issues can cause it, too,” Dr Matthew says. “This is why we need to do further testing.” Tests for TSH (thyroid stimulating hormone) and a Free T4 test also need to be conducted to conclusively qualify hypothyroidism.

If a dog is diagnosed with hypothyroidism, it’s a condition they will have for life; there is no cure. But, it’s not all doom and gloom. The good news is, once diagnosed, it’s a disease that’s very straightforward to treat. Dogs are given tablets to supplement the thyroid hormone. It’s a case-by-case assessment, so the dose and frequency is individual, and it’s monitored regularly by blood tests to ensure the thyroid is not being over or under supplemented.

Layla Wilkinson noticed her Cattle Dog cross, Percy, aged six, was looking very sad and sorry for himself. He was lethargic and certainly not the charming, happy-go-lucky dog he normally was.

Percy was also gaining weight, so Layla put him on a strict calorie-controlled diet. Layla says that when house-sitting a home with Greyhounds, Percy dug up all the bones the dogs had buried in the backyard, ate them all and, as a result, became quite ill. She knew there was definitely something wrong.

“An ultrasound revealed that he had a bright liver and he was given a series of tests for hypothyroidism — the results were positive,” Layla says. “He was immediately put on Thyroxine and almost overnight, he began to improve. Within a week, you wouldn’t think he was the same dog. Two years on and he’s full of beans now and back to being himself again.” Every six months, Percy has blood tests to monitor his levels, but he has, thankfully, made a full recovery.