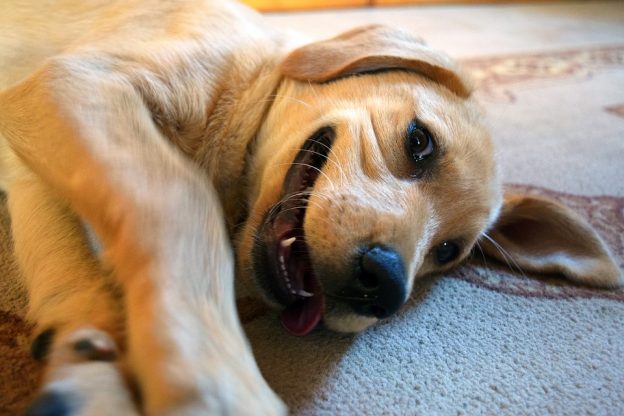 Do you know what your dog is trying to tell you or are his efforts at communicating with you lost in translation? Tim Falk reports.

Depending on who you ask, the fact that dogs can’t talk is either a crying shame or one of their greatest assets. On the one hand, who wouldn’t love to chew the fat with their canine companion and gain an insight into exactly how their dog views the world? On the other, there’s a lot to be said for a best friend who never answers back and simply gives you all the unconditional love he or she has to offer.

But no matter which side of the debate you choose, you have to admit that there are some situations when it would be very handy if your dog could wax lyrical. When our dogs are sick, in pain or just doing something funny or quirky, wouldn’t it be great if they could tell us exactly how they’re feeling?

But while dogs might not be able to use words to communicate with us, they do have plenty of ways to tell us what’s going on. “Dogs use body language constantly to express their emotions and their intentions. It is up to humans to learn how to read these postures and gestures and to act accordingly,” Dr Jo Righetti, animal behaviourist and host of radio show Talking Pets every Thursday night on 2UE Talking Lifestyle, says.

If you want to know what your dog is trying to tell you, it’s essential to decipher the nuances of his body language to better understand how he’s feeling.

Chiara Perri from Point Cook Dog Training explains that canine body language is behaviour. “The way dogs move, look at you, their posture, the way they carry their body and tail, the facial expressions and more are all forms of communication and it can be directed at both people and other animals,” she says.

Learning to decipher your pet’s body language will help you understand your dog better, know when she’s in pain and help you know when she’s uncomfortable or anxious in any given situation. But what are some of the tell-tale body language signs you can look for to get a better idea of what your pet is thinking and feeling?

Always pay attention to the posture and facial expressions. “Relaxed dogs appear soft in every way, even down to the way they move,” Chiara says. “Mouths are open, tongues are lolling and hanging out, eyes are soft, ears are relaxed, tail is horizontal and the bottom is wobbly. Breathing is normal, the dog is keen to interact, it appears calm, it can follow cues and it can focus on the owner.”

On the flipside, a nervous or anxious dog, or even a dog displaying aggressive behaviour, will appear much more rigid. “The tail will be very high or very low, the mouth will be clamped shut or open widely, the eyes appear to be hard staring and pupils can be dilated,” Chiara says. “The dog may hyperventilate, appear on edge and even behave erratically. Everything about this dog appears unsure and not relaxed.”

With this in mind, Dr Jo stresses the importance of paying attention to your dog’s body language as a whole. Instead of just focusing on the tail, the ears, the posture or any other single factor, look at all aspects of body language collectively.

“A wagging tail alone signifies a state of alertness, an emotional arousal. Combined with relaxed ears and eyes, it signals friendliness; combined with ears pinned back or held rigidly forward and eyes staring or averted, it may signify an attack about to happen. We need to look at the entire dog,” she says.

Let’s take a closer look at some of the body language cues to look for when your dog is trying to communicate with you.

Signs your dog is trying to tell you he…

Is uncomfortable or anxious

If your dog is feeling out of his comfort zone in any circumstances, he might try to avoid the situation. “He might aim to run or walk away. He may try to hide. He may avert eyes and keep ears flat. He will try to look small and his tail may be held between his legs. He may come to his owner for support and hide behind their legs,” Dr Jo says.

Chiara also points out that sometimes dogs will try to “bluff” their way out of an uncomfortable situation. This could see them move forward and bark with visible hackles, while they may also growl, avoid eye contact, seem to be pointing the hind legs out to escape, and carry their tail and body very low to the ground.

“The two earliest signs of stress are licking of the lips and yawning, and this is the dog expressing it is not comfortable. If the situation does not change, then it may move on to trying to move away, and if it does not have this option, then this is when growling appears.”

Is in pain or feeling unwell

No one likes to see their pooch in pain, but sometimes the signs of a pet that is feeling poorly are not always immediately obvious. To start with, your dog may have less energy than usual and may seem lethargic. They may have a reduced appetite or could whimper or bite when touched.

“They may behave unusually, such as not jumping up on furniture or pressing their head against the sofa to alleviate pain. Unusual behaviour needs to be investigated by a vet,” Dr Jo says.

If a dog wants some alone time, you will often see what are known as “cut-off” signals. This means that when the dog has had enough, it will disengage or just not seem as enthusiastic as it might have been 10 minutes earlier.

“Some dogs stop giving the toy up during fetch and that might be because they no longer want to chase the toy. Some dogs also change their play tactic and may start mouthing arms or hands or become easily distracted,” Chiara says.

Quite often, dogs will also take themselves away to their quiet space, such as a crate or a favourite sleeping spot. This is often seen when there are visitors or a party, and it’s important that you don’t force the dog to be involved in this situation as the dog has made it clear it prefers not to be there.

“Dogs will often instigate play by bringing their owners a toy,” Dr Jo says. “They may also try to get attention by pawing owners, following them from room to room or even by biting on clothes. The latter is not desirable, so it’s better to respond to your dog when they show desirable behaviours.”

Some dogs will look at their toy and look back at the owner and see if the owner can work it out. “Some dogs, especially younger ones, will go to the trouble of pulling socks out of baskets and then running away. In this situation, they are often trying to engage the owner in a game of ‘chasey’ and they learn that the sock stealing is a great way to get attention,” Chiara says.

“They are not being naughty as such, just playful. Dogs are very good at expressing themselves like that; it is a matter of the owner working it out.”

Wants to go for a walk

When a dog wants to go for a walk, it sometimes gives a subtle hint by grabbing its leash and bringing it to the owner. Your pet might also go to the door or begin pacing and heading to the door around the time you usually take him out. Some dogs will even bark and look at the door or walk to the car and hint they are ready to go.

“These behaviours only occur because the owner has reinforced it by then taking the dog out. It is important that as much as we need to learn to understand what our dogs are saying to us, that we are not indirectly reinforcing inappropriate behaviour,” Chiara says.

Finally, remember that canine body language is complex and that you need to look at the whole picture, not just one part of your pet’s body. Also remember that each dog has its own behaviour quirks and nuances, so the more time you spend getting to know your pooch, the better placed you will be to understand exactly what it is he’s trying to tell you.

If I could talk

While it’s not talking as such, dogs can use a range of vocalisations to tell us how they’re feeling. “Some dogs do use sounds and vocalisations to let us know how they feel but some will stay quiet, especially when they are unwell or distressed,” Dr Jo explains.

“Vocalisation is certainly one way dogs communicate,” Chiara says. “However, they do a whole lot more with their bodies, expressions and behaviour first. When dogs vocalise, it tends to be when nobody is listening or noticing. Learning to tap into their method of communication is not only important, but very handy as you can then understand what your dog is saying!”