3 tips for surviving storm season with your dog 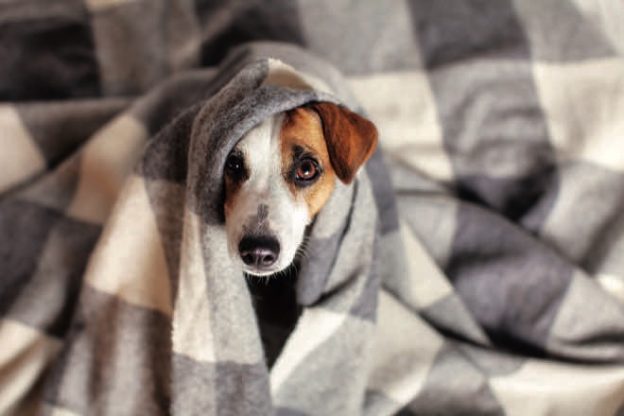 Summer is famous for storms, and along with storm season comes reason to fear for some of our four-legged friends. By Sophia Auld.

Shortly after I met my husband, he took me out for a beachside picnic. But our romantic evening was interrupted by a phone call around 9pm. “We’ve got your dog,” the stranger said. Sweet Annie, my husband’s Bull Arab, had climbed the chain-wire fence and bolted in fear at the sound of fireworks, running more than 10km before taking refuge in the stranger’s yard.

And fireworks weren’t the worst problem. Annie became part of my husband’s life when she arrived on his doorstep during a storm. Given the frequency of storms in our area, this became a big issue. Thunderstorm phobia involves excessive and persistent fear of storms and is quite common in domestic dogs, Justin Jordan, a dog behaviourist and the owner of Jordan Dog Training in Brisbane, says. “They hear the loud noise, feel the vibrations of the house shaking and the static electricity that comes with a storm and consider it threatening,” he explains. “Dogs can sense the change in barometric pressure leading up to a storm, which may cause your dog to show signs of anxiety long before you realise that a storm is brewing.”

Its exact cause is unknown, but contributing factors include a predisposition towards anxiety, lack of exposure to storms in early life and reinforcement of fear responses by the owner. Justin, who has worked in the industry for more than 30 years, says it can also stem from a bad experience in a storm, such as a lightning bolt striking the house or tree falling in the yard. “In some cases, we also find that the dog has picked up the fear from one of the other household pets that already has a phobia. This sends the wrong signals to the dog, causing it to also become nervous or scared of the approaching storm,” he says.

Some common symptoms of thunderstorm phobia include trembling, panting, hiding, pacing, drooling, incontinence, clinging to the owner, and barking, howling or whining.

If you have a puppy or young dog, you can take steps to reduce the chance of her developing a storm phobia. “Playing a thunderstorm soundtrack with the bass turned up while playing with the puppy and diverting its attention with positive experiences can be beneficial, slowly increasing the volume as the dog becomes accustomed,” Justin says.

“If the puppy is food motivated, getting a super-yummy treat out and doing some obedience exercises or trick training may be enough to divert the puppy’s attention and desensitise him to the approaching storm. Playing inside games such as hide and seek can help distract your puppy until the storm has passed.”

If your dog already suffers from storm phobia, Justin recommends the following three steps to help ride storms out:

Owners can inadvertently pass their own fear of storms to their dogs, so keeping calm is crucial. “Dogs are exceptionally gifted at picking up on our emotions, and your reaction as a storm approaches can make the difference between a calm dog and a nervous wreck,” Justin says.

During a storm, Justin advises giving your dog a safe place to hide. “If your dog loves his crate, then this is a great option. Providing a dark, sheltered environment inside the house offers a safe place to see out the storm and helps block out the thunder and lightning,” he explains. “It also keeps them safely contained in case they tend to break out of the yard during a storm. Give him a space he feels safe in, where he can wait out the storm. It should be a place he can get to even when you aren’t at home.”

It can also help to close the doors, windows and curtains and turn a radio or TV on at a higher-than-usual volume to block out some of the lightning and thunder, Justin says.

Justin recommends distracting your dog with fun activities or a favourite treat to help take her attention away from the storm.

If your dog’s storm phobia doesn’t respond to these strategies, you might need some professional input. “They may benefit from a training program designed to desensitise them to the stimuli associated with storms. There are storm desensitisation DVDs available through your vet or dog behavioural therapist that may help,” Justin says.

A variety of natural remedies are available to help with anxiety. Some owners have reported success with aromatherapy oils and flower essences, such as Rescue Remedy Pet. Your vet or behaviourist may recommend a ThunderShirt, which helps to allay anxiety by applying gentle, constant pressure, similar to swaddling an infant. Natural therapies such as Adaptil or Anxiety by HomeoPet may also be advised. Extreme cases may require medication from your vet in conjunction with training to help resolve your dog’s phobias, Justin says.

Whatever the case, being prepared early, and managing your own reactions, will give your furry friend the best chance of staying calm through storm season.