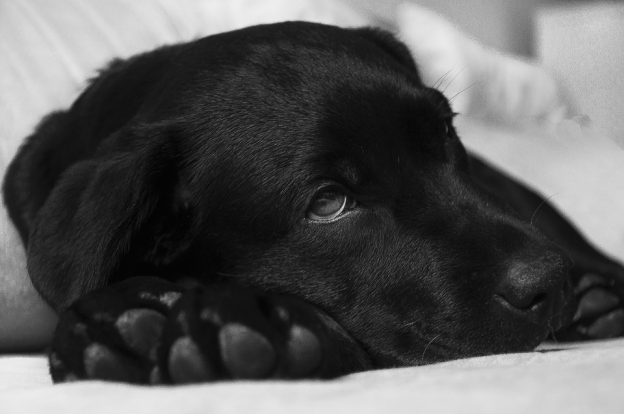 Do you recognise the behaviour and body language that could indicate your pet is in pain? Tim Falk reports.

No dog lover likes to see their pet in any sort of pain. Whether it’s the aching joints of arthritis or simply a visit to the vet that requires them to endure some brief discomfort, we feel their pain as if they’re an extension of ourselves.

But sometimes this pain isn’t immediately obvious to us. “Dogs are very stoic and can conceal the fact that they are hurt or in pain,” dog trainer Cat Saunders from Melbourne’s The K9 Company says. “Often this may be due to the fact that having fun is more important than resting or healing, and this can lead to increased pain or injury after they’ve ‘had their fun’.”

According to Dr Karen Davies from Direct Vet Services in Point Cook, Victoria, some dogs can be very good at concealing pain and others let you know right from the start, just like humans. “If the pain is chronic in nature, some will learn to tolerate it and get on with life,” she says.

However, the symptoms a dog shows will vary with the location and source of the pain. For example, your pooch may not go up the stairs in bounding leaps anymore but rather go up one step at a time.

“If pain is in more than one limb, the animal may not show apparent lameness, as which one does it limp on if both are equally as sore?” Dr Davies says. “Chest, abdominal and back pain can all look similar with a hunched stance. So even for vets, it can sometimes be a little confusing, and if you have a stoic animal, then that makes it all the harder.”

The key to recognising when your dog is in pain is to understand his body language and behaviour. Once you know your dog, you will realise when his behaviour is normal or completely out of character.

“The dog not getting up and greeting you at the door when you arrive home or not tucking into its meal at night with the same enthusiasm could indicate a problem. Any behaviour that is out of the ordinary should be considered and a possible cause looked for and veterinary attention sought, particularly if the change in behaviour, however mild, lasts more than a day,” Dr Karen explains.

As our dogs simply can’t tell us when they’re suffering, let’s take a look at six common signs that could indicate your pet is in pain.

For many dogs, food is the most exciting thing in the world — by some margin. So when they all of a sudden seem disinterested at dinner time, this could be a sign that something isn’t right.

“Lack of usual enthusiasm for a meal or not eating the same volume may be an indication of problems. Disinterest in favourite treats is a definite issue,” Dr Karen says.

Where things get tricky is the fact that any form of pain could result in decreased appetite. “Painful limbs mean the pet may not want to get up to walk to the food bowl, mouth pain from dental disease makes it painful to eat, upset tummy and nausea will cause poor appetite. Even a sore neck will mean the pet will not want to lower its head to the food bowl,” Dr Karen explains.

So if your food-obsessed canine is off her food, take her to the vet for a check-up.

If you’ve ever tried to help an injured dog, for example if it’s been hit by a car, you may have experienced first-hand that aggression can sometimes be a response to pain. Dr Karen says that generally hiding, being grumpy and growling or a change in a dog’s usual disposition can be a cause for concern.

“Some pets do not tolerate a great deal of pain and may snap if they are out of sorts. Others will never bite no matter how great the pain,” she says.

“If the pet thinks you are going to touch them where it hurts, they may react defensively, for example touching the abdomen if they have gastrointestinal pain. No one disease process or pain reaction will make a dog more likely to snap than another — pain is pain and one’s ability to tolerate it is an individual thing.”

Does your dog go crazy with excitement when she gets to chase her ball? Does she accompany you for a jog each and every day and never look tired? If so, you’ll probably be quick to deduce that all is not right when she suddenly seems disinterested in exercise, lethargic or simply unable to move as freely as usual.

A lack of energy is a fairly obvious indicator for owners to pick up on. For example, if your pet just cannot be bothered to join you for a walk or run, if he decides he wants to turn around and go home earlier than normal, or if he seems sluggish and doesn’t run at his usual pace, you will most likely realise something is wrong.

However, Dr Karen says mobility issues tend to look a bit different unless disease is advanced. “It may mean that the animal goes up one step at a time rather than the usual two or three, or it may not get up on the couch as often. The pet may be lame and have a limp, or may their drag feet and shuffle rather than lifting them,” she says.

“Lethargy is not specific and could result from any disease causing pain or discomfort. Decreased mobility tends to lend itself to the parts of the body that are required for function, ie muscles and bones. These may be of the limbs but also the spine.”

Once again, any unexpected reluctance to get active should be investigated by your vet.

The way your dog breathes is something you may never pay any attention to until it changes. Of course, you’d expect your pet to be sucking in the big ones after a sprint or an extended period of exercise, but it could be a cause for concern if breathing doesn’t return to normal.

“Any change in rate, depth or rhythm that does not return to normal reasonably quickly and, of course, any change in sound,” are the signs Dr Karen recommends keeping an eye and ear out for. “Change in breathing could relate to pain, heart or lung disease, a change in temperature or humidity. It may be that it is just a hot day and change is normal, however once the animal cools, the breathing should return to normal,” she adds.

If you live along Australia’s east coast, breathing changes could be a symptom of tick paralysis. It’s also worth pointing out that brachycephalic breeds such as the English Bulldog and Pug are more prone to breathing difficulties than other dogs.

While it’s true that our dogs can’t actually talk to tell us they are in pain, they can still use a range of sounds to communicate how they are feeling. “Some will whimper, others will pant, and the odd dog will scream or howl,” Dr Karen explains.

If you pet displays this type of reaction when touched on a specific location or when using a certain part of its body, this can be an indication of pain. “For example, if the pet cries trying to get up on the couch, it could be an indication of spinal, limb or abdominal pain as these are the areas being stretched out,” Dr Karen says.

“Alternatively, an animal with high blood pressure or a brain tumour feels the pain in its head like a headache or migraine, so pain may be exacerbated by noise or bright lights, or even sudden movement of other things around it.”

Have you ever noticed your dog paying particular attention to grooming a specific part of his body, for example a paw or joint? If so, this could be your pet’s way of massaging a painful area.

“We do see at times, particularly with joint pain, that animals will excessively groom the area to relieve pain, much the same way we might rub or massage an area,” Dr Karen explains. “If the skin/fur is becoming discoloured, the animal is creating a secondary wound [and] it may be an indication of underlying pain. It may also be a behavioural issue and a sign the pet is stressed. Or it could have a number of underlying causes, skin disease itself being one.”

As these six signs show, there are plenty of things you can look for that could indicate your dog is not at his best. “If you feel your pet is in pain, you should always seek an appointment with your vet. It may be that the cause of the pain can be fixed and the problem sorted,” Dr Karen says.

“It may also be a condition that requires short-term medication or longer-term management. Your vet, after careful examination and possibly some testing, is best to advise you on the options relevant to your pet and its particular problems.”

Signs your pet is in pain don’t have to be physical; they can also be behavioural. “If your dog displays any behaviour that is out of the ‘norm’, I strongly suggest having your dog checked by a vet,” dog trainer Cat Saunders advises.