Resource Guarding: Is your dog over-protective of their things? 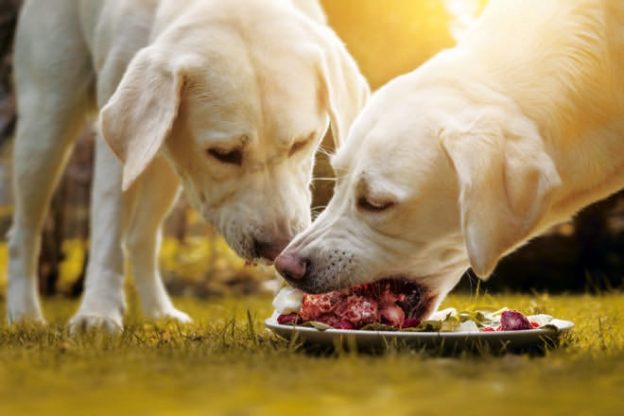 It’s common for dogs to be a little over-protective of their bowl or favourite toy. But, as Kristie Bradfield discovers, behaviour like this can become dangerous if it’s not addressed.

Dogs are funny creatures. When they find something they love, they’ll love it until there’s nothing left to love. And they’ll protect and guard it completely, whether it’s a well-chewed toy, a bowl of food or a prime sleeping spot in front of the heater. Whatever it is, if it has value to the dog they’ll make sure no one else gets it.
Does this sound like your dog? Just as children need to be taught how to share, sometimes we need to teach our dogs to “let go”.

Why do dogs guard resources?

It’s important to understand that resource guarding (also known as food aggression) is common canine behaviour. It manifests when a dog perceives a threat to their resources (which can be food, treats, toys or even people) and fears they’ll lose what they have. The dog’s reaction to this threat can range from baring teeth to growling and snapping — and is almost always aggressive.

Trainer Tenille Williams says insecurity is almost always at the root of the problem. “Resource guarding is a natural trait for survival in the wild,” she says. “If
you don’t protect your food, someone else will take it.”

The genetic potential to resource guard varies from dog to dog and Tenille says that, while there’s an innate element to it, it’s just as likely to be a learned behaviour.
“If the dog has learned through experience that it can lose its precious resources if it doesn’t protect them, this behaviour will continue,” she says. “This can often be the result of well-meaning dog owners taking food from their dogs regularly to prevent guarding in the first place.”

What to watch out for

It’s impossible to predict how any given dog will resource guard when they feel threatened. But Tenille says there are a few common behaviours to watch out for.
The changes in body and behaviour can be subtle and usually begin with the dog sti ening its body. “The dog will freeze and may lick its lips, all the while looking towards the threat but staying closely over the resource.

“Next, they’ll raise their lips to show their teeth and the dog will start to give a low growl. Some dogs may raise the hair on their back.

“If the dog is eating, they’ll often speed up or try to drag the food away. And if the threat to their resource still exists, the next stage is a lunge and bite.”

Dogs that guard resources can be unpredictable, so care should be taken to not escalate the behaviour.

“Never try to stop or prevent resource guarding by forcibly taking food from your dog or removing it often,” Tenille says. “You don’t want your dog to view you as the person who always wants to take what they have.”

This problematic behaviour can become even worse if there’s more than one dog in the family.

“Dogs that regularly have to compete for resources such as food can become serious resource guarders,” Tenille says. “This can happen if there isn’t enough food to go around when they’re pups.

“They can also learn to guard if other dogs or pups are constantly stealing their food or other resources and they learn to defend it with aggression.”

When an aggressive display works for them once, they quickly make the connection between their behaviour and the outcome. It’s a very powerful lesson to learn.

As with all behavioural issues, it’s better to start the training process early. Helping your dog to create positive associations between you and items of value is important, as is building trust. Raising a well-adjusted dog means teaching them not only that you’re the bringer of good things but also that, while you may take away their food, toys, or treats, it’s usually only for a little while and they’ll get them back.

1. Bowl time
The bowl is often the scene for guarding behaviour, so Tenille suggests changing the way they see you. “Teach your dog that when you
approach their bowl, it’s to give them something even better,” she says.

As an example, if your dog has their regular, boring, dry dog food in their bowl, toss in a little bit of steak and leave.

“You want your dog to learn that your approach is a good thing and results in more or even better food.”

There will come a time when you’ll need to take something (such as a toy or a treat) away from your dog. But instead of just taking the item, teach your dog to swap.
Dogs are very smart and won’t be keen on swapping their treasure for just any old thing. For the swap to work, you need to o er something else of equal or higher value.

“When starting the swap game, present the higher-value item and allow your dog to take it first, then remove the item they just had,” Tenille says.

She also suggests pairing the swap with a command, which will help your dog make the association between the command and the behaviour.

Another way to create a positive human/ food experience is to hand-feed your dog as often as you can. This instils security and trustworthiness, which Tenille says is one of the goals of hand-feeding.

“Feed often from your hands to associate your hands with something pleasant to have near their mouth. Training with treats is a great way
to do this, with the bonus of training other commands while you hand- feed,” she says.

Dogs that guard resources do so because they fear losing not only the item but also the positive feelings it gives them. And any animal in this situation has the potential to be outwardly aggressive — even those that have been a member of the family for years.

If your dog already guards its resources and displays aggressive behaviour such as baring teeth, growling and snapping, you should make an appointment with a qualified professional trainer as soon as you can.

Ultimately, you need to teach your resource-guarding dog that they have no reason to fear you. They need to learn that you approaching their food bowl isn’t a bad thing and that just because you’ve moved their half-chewed bone off the couch doesn’t mean you’re going to keep it forever.

Establishing that trust, and being consistent with behaviour, builds confidence in your dog. And confident dogs have no need to guard resources.