DogsLife · Dogs News · Handedness and Its Effect on Dogs’ Behaviours

Handedness and Its Effect on Dogs' Behaviours 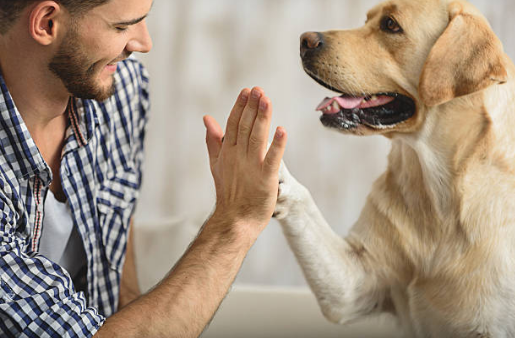 Here’s one for the “well, I never” files: did you know dogs can be left- or right-handed, and that it may affect their personality and aptitude for certain tasks? Mel Hearse investigates.

Handedness is not only a “thing” with canines, it’s also been the subject of some pretty serious study. In fact, research suggests that when it comes to canines, lefties and righties may be two different beasts.

Dr Stanley Coren, prolific author of doggy behavioural tomes, and veteran in the field of studying the differences between humans who were left-handed and those who are right-handed, says lefties — both canine and homosapien — are more prone to negative emotions. In his article on handedness for Psychology Today, he reports, “The reason for studying handedness is not simply an interest in motor coordination, but because some neuroscientists believe that handedness tells us something about the way that a person’s brain is organised.” He adds the left side of the brain controls the right side of the body and vice versa, and there is some evidence to suggest the emotional responses on the two sides of the brain are somewhat different.

The research suggests the left brain is the side for positive feelings — we’re talking love, comfort, attachment to others and safety. Conversely, the right is connected to “negative” emotions — fear and aggression, and flight from danger. And how does this relate to handedness? Dr Coren says as the left hemisphere of a righty’s brain controls their dominant hand, it may also dominate their emotions — meaning a preference for the positive, and vice versa for the lefties.

And what does this have to do with dogs? Research suggests many animals, including birds, frogs, monkeys and dogs have similarly organised brains. A team of researchers at the University of Adelaide in Australia, headed by Doctor Luke Schneider, studied a group of 73 pet dogs to see if there were differences in the emotional responses of right- and left-pawed dogs. The findings?

Animal scientist, Dr Lisa Williams (at the time working under the surname Tomkins), completed her postdoctoral studies on objective measures that can be used to determine the suitability of dogs for guide dog work. A key measure was revealed to be connected to being left- or right-handed.

The study, which assessed 114 dogs entering the guide dog training program in Sydney, covered a range of 11 different characteristics which were found to objectively measure a dog’s temperament and suitability for such work. Of these 11 characteristics, the two most interesting were hair whorls and, you guessed it, lateralisation (the left- or right-handedness of dogs).

And the interesting part of the research? Dr Williams followed the dogs throughout their guide dog training and observed the dog’s “paw preference” and how it impacted their success on completing the program. The lefties in the KONG test had a significantly lower success rate in guide dog training, with only 38 per cent passing the program. This was compared to the 64–68 per cent successful completion rate for the right-handed or ambidextrous dogs, a finding which tallies with previous research that found left-handed animals were more likely to be fearful and could withdraw from novel situations.

How do you figure it out?

The method used in both studies (and the more significant finding in the guide dog study), involves using a KONG toy. The researchers filled the toy with dog treats and observed the dogs playing with them and extracting the treats. Each dog was observed 50 times to determine what paw they preferred using. The results were interesting; around half turned out to be ambidextrous (47 per cent), 29 per cent left-handed, and the remaining 24 per cent right-handed.

The second test used is referred to as the “first stepping” test. It involved having the dog walk down a flight of stairs while on a lead, observing which foot it used to take the first step — and this was repeated 50 times. This test revealed 46 per cent had a right preference, 30 per cent a left preference, and 24 per cent displayed no preference.

What does it mean for dog owners?

When it comes to choosing a dog, you’re far better off going by breed and raising your canine well, addressing any signs of behavioural issues early. It’s also not realistically possible to check handedness when choosing a puppy, but it’s certainly an interesting experiment to try out on your pooch (and they’ll thank you for the KONG treats!).