Greyhounds and the incorrect misconceptions associated with this breed 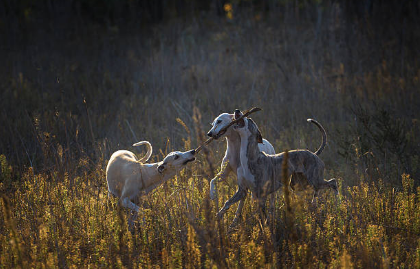 This beautiful breed has a bad reputation but a real heart of gold. Carrol Baker learns more about Greyhounds and the people fighting to save them.

If you are looking for a gentle, loving dog, that’s low-maintenance, big on cuddles and small on exercise needs, you can go no further than a Greyhound. Yes, you read that correctly.

For the uninitiated, the concept of sharing your home with a Greyhound might seem a little at odds with your beliefs about them. They need lots of exercise, right? Aren’t they an aggressive breed? They’re just an outdoors dog for racing, aren’t they?

You might be surprised to learn that the answer to all those questions is a resounding no. Greyhounds can make wonderful pets; they have a sweet disposition and are very loving.

Lisa White, founder of the Queensland-based Greyhound rescue group called Friends of the Hound says Greyhounds are an easy-going companion pet that will fit into most families with ease. “They are so adaptable. They’re a sensitive, soulful dog,” she says. “I have had so many people come back to me after taking home a rescue Greyhound and saying, ‘Lisa, this dog has changed my life’.

“They can also be quite quirky; they have different personalities,” she adds. “They can be goof balls and, at other times, very chilled out.”

Those who are fortunate enough to share their home with one of these gentle giants of the canine world say one of the best things about them is that there is more of them to love, but that doesn’t mean they are hard work to look after. Their short coat just needs a brush to keep it in check every now and then.

People think because they are racing dogs, Greyhounds need lots of exercise. Peter Flann, who founded the Sydney-based Greyhound Rescue along with his wife, Janet, says that this is a myth. “They’re couch potatoes that are capable of running 70km per hour in short bursts, but they mostly like to snooze,” he says.

Your greyhound will enjoy walks with you, but they don’t need lots of exercise; they’ll comfortably fit in with your routine.

It’s also not true that all Greyhounds will chase small animals. Lisa took her first rescue Greyhound Zada home to two cats, chickens, horses and two small children. “She fitted right in and was very much part of the family right away,” she says.

Lisa started her rescue group after spotting Zada in a cage at a pound in 2002. “I saw this beautiful blue face looking out at me and another volunteer said ‘that’s just a Greyhound, it’s not here to be rehomed, it’s here to be put down’,” says Lisa. “But I couldn’t forget about it; I kept seeing that poor dog’s face. I was online until 3am; I knew nothing about Greyhounds and what happens to them.”

After Lisa navigated her way through mountains of red tape, 18-month-old Zada found her new home with Lisa and her family.

The Greyhound is best described as a large, lean and muscular breed. They date back over 6000 years to ancient Turkey and became a highly sought-after dog used for hunting because of their speed and agility. Noblemen owned Greyhounds; pharaohs in ancient Egypt are also depicted with their graceful hounds alongside them.

Fast forward a few centuries and what started out as a friendly wager between friends who owned Greyhounds has developed into a money-making industry where dogs are used for racing and discarded when no longer needed.

Adjusting to their new home

If you’re looking for a low-maintenance pet that’s affectionate and rarely barks, these gorgeous pets tick all the boxes. “They’re such an easy-going companion pet and are a very people-focused dog,” says Peter.

Peter and Janet have rehomed around 1000 Greyhounds in the last decade. It’s fair to say, he knows a thing or two about these lovable lanky pets.

Many Greyhounds find their way to Greyhound rescue organisations because they aren’t winning races or they’ve reached their use-by date. “At age four and a half, they’re like a 35-year-old rugby player; not wanted as they’re past their prime,” says Peter.

There are many rescue groups that take in these pets from shelters or trainers and rehome them. “My advice is to put your faith in a rescue association and don’t source a Greyhound directly from a trainer,” he says. Rescue organisations put dogs through a transition program, get them socialised to the outside world, and work to match a particular dog to a particular family situation.

After reading this heartbreaking story, you might be thinking about welcoming a Greyhound into your family. Before you do, there are some things you need to know.

It’s not a good idea to let your happy hound off-leash in a public area — they pick up speed and momentum quite quickly. Greyhounds are taught to chase the fast-moving lure and they have good vision. It’s better to play it safe.

With their super-short fine coats and minimal body fat on their lean frames, Greyhounds feel the cold. They need a warm snug spot indoors to warm their toes by a toasty fire in winter, a cosy warm bed and a coat to wear outdoors in the cooler months.

Generally, Greyhounds have a clean bill health. Some may have issues with their teeth from chewing on bars; others may have pannus, a treatable eye disease. If your dog is diagnosed, they’ll need eye drops for the rest of their life.

A Greyhound’s nails need to be regularly trimmed as they grow quite quickly. Corns on foot pads are another issue that may affect Greyhounds. You’ll notice a small circular area that might be raised and your dog may limp. A vet check and various treatment options can fix the problem.

The idea of muzzling greyhounds was introduced many years ago to stop them injuring themselves during a race and, sadly, it’s assumed that ex-racing Greyhounds will chase small animals. Some states and councils still require Greyhounds to wear a muzzle in public places, so check with your local authority.

Zoumi is a beautiful black Greyhound with a sweet gentle disposition. Her human, Ausilia Cristiano, has been in Zoumi’s life for a year. Zoumi was a failed racer, a shy, timid dog who won Ausilia’s heart the moment she laid eyes on her.

“She’s got such a sweet, gentle disposition,” Ausilia says. “When we arrived home that first day she walked straight past chickens in my yard and didn’t bat an eyelid. She’s so well-behaved.”

Ausilia also cares for her elderly parents and Zoumi goes with her every day to visit them. She also loves playing and zipping around on the beach — it’s her favourite pastime! “Zoumi is my constant companion. She’s a beautifully natured dog,” says Ausilia.

If Patch’s human, Kristal, could think of one word to describe her dog Patch it would be “bubbly”. “He’s just so fun-loving and smiles all the time,” she says. “Patch bounds out of bed, wiggles and runs around in happy circles in the morning, follows me around for a bit, then lies on the lounge.”

He also enjoys hanging out with Bella, Kristal’s Great Dane X. Patch’s happy-go-lucky nature belies his former life as a racing hound. “He’s almost blind in one eye, missing some teeth, and has ear injuries. I was told he was kicked,” she says.

Kristal says Patch has become a much-loved family member. “He’s brought me so much joy; I look forward to coming home each day.”