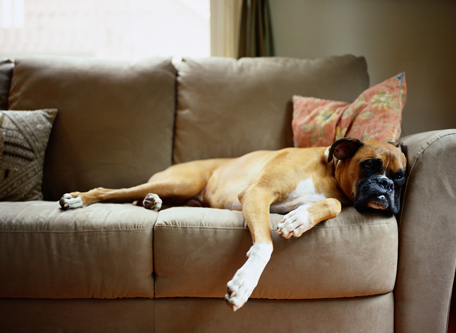 Heart disease in dogs is a major killer and is not preventable, but improving treatments show a not-so-gloomy outlook for dogs today. Sue Moses takes a closer look at heart conditions in canines and how to beat them.

Brock, an eight-year-old Boxer, was enjoying his daily run in the park when he suddenly crashed to the ground and lay motionless.

Owner Peter Andrian thought his beloved Brock was dead. But within minutes, the dog regained consciousness and stood up, although somewhat confused and wobbly on his feet.

Andrian rushed Brock to Sunbury Animal Hospital in Victoria and explained the circumstances to veterinarian Dr Glen Hastie, who ran a series of tests over two days.

The diagnosis was a cardiac arrhythmia associated with cardiomyopathy  one of the two most common heart conditions affecting dogs.

Dogs Life talked to Hastie about the effects of heart disease in canines. Statistics have shown that 12 per cent of deaths in dogs are caused by heart disease and other heart problems. This is the second-largest health problem in dogs, after cancer, Hastie said. Heart conditions left untreated result in death within weeks or months. There is little room for error with diagnosis or treatment.

Symptoms are treated effectively with medication, but regular monitoring of medication is necessary, Hastie said. For all dogs, an annual check-up provides the opportunity for early detection of irregularities. Early treatment of heart disease is very important, he stressed.

Brock the Boxers diagnosis was not a complete shock to his owner the breeder had explained to Andrian that Boxers had a genetic predisposition to heart problems, and at young age, a heart murmur had been detected.

Following his collapse, Brock immediately started on medication tablets twice daily and now, aged 12, he is fighting fit. It certainly wasnt a death sentence. But it gave us a hell of a fright when he first collapsed, Andrian said. Over the four years since, he has collapsed a few times, but we realise what is happening and just sit with him and pat him until he comes around. It has meant having to reduce his exercise to some extent, which is not easy with a Boxer. We have two Boxers, and so that Brock doesn’t overexert himself, we try to only let one run off the lead at a time.

Now that Brock is 12, he has slowed down but is in great shape, Andrian said. Although we do expect his heart problem will catch up with him eventually, he conceded.

Brock’s medication is valued at more than $100 a month, but for Andrian, not medicating him was never an option.

He has another younger Boxer that has also been diagnosed with a heart murmur, but the problem has not progressed further. I wouldn’t think twice about getting another Boxer. They are great dogs with a fabulous personality, Andrian said.

You know when your dog is not right, Clements said. She seemed to be off-colour and she had a slight cough. She was a bit wobbly on her legs at times and had lost some interest in running and playing.

Also a patient at Sunbury Veterinary Hospital, Sophie was booked in for an appointment. Glen (Dr Hastie) listened to her heart and his face dropped we knew the news was not good, Clements said.

Hastie recommended further tests and his fears were realised. Sophie was diagnosed with the second-most common type of dog heart disease, mitral valve endocardiosis. Cavalier King Charles Spaniels are predisposed to the condition.

Without treatment, her life expectancy would have been short, Clements said. Unfortunately, her heart murmur was diagnosed as category five (six being the worst), so a high dose of medication was necessary, at a cost of around $100 a month, with tablets administered three times daily. We just love Sophie to bits and would have done anything for her.

Luckily, the medication returned Sophie to nearly normal and she is now aged 14.

We give her the tablets with a treat and she lets us know when it is time for them, Clements said. The condition does require a big commitment. Going on holidays means making sure someone else can care for her. She can’t miss the medication and the diuretics make her drink more and wee more often.

Clements also had one of Sophies pups, which was diagnosed with the condition at six and died aged 10. The risk of this heart condition is the only off-putting thing about the breed. Cavaliers are the most beautiful dogs, she said.

Hastie told Dogs Life that treatment for both cardiomyopathy and mitral valve endocardiosis (each a type of acquired heart disease, with some breeds genetically predisposed) is medication for the remainder of the dogs life.

For some people, the cost of medication is an obstacle, Hastie told Dogs Life. But for those who are able to afford it, along with the task of giving tablets twice daily, the rewards are great.

Unlike people, heart conditions in dogs are generally not preventable. Dogs don’t suffer from high cholesterol or get classical heart attacks or heart pain, he said. Excess weight doesn’t cause a bad heart either, but makes it more difficult if there is a heart condition, as the dog has to work harder to get around, causing additional exertion and strain on the heart.

There are a number of less common congenital heart problems, such as valve disease, holes in the heart and abnormal blood vessels around the heart. For some of these there are surgical techniques that can repair the defect, Hastie said.

While valve replacement is not yet available, heart surgery is possible for some conditions. For example, pacemakers can be implanted for dogs with conditions such as a slow or irregular heart. Recycled human pacemakers are used, he said. The most difficult thing for owners of dogs with a heart condition is that the dog doesn’t usually die suddenly, but tends to deteriorate slowly towards heart failure. Usually a decision is made to euthanase before that point is reached.

Mitral valve endocardiosis is when the heart valve thickens and fails to function as a one-way valve. The result is backflow of blood in the opposite direction of normal flow, so the heart has difficulty pumping blood around the body. There is no known cause for this heart condition, which also occurs in humans.

It is most common in small breeds, with Terriers and Cavalier King Charles Spaniels often genetically predisposed to the condition. Symptoms include a light cough, fatigue and difficulty exercising. The cough is the result of fluid building up in the airways.

Three types of medication can be used a diuretic to clear the fluid, a drug to lower blood pressure and a third medication is introduced as the condition becomes more advanced to improve the strength of heart contractions.

Without medication, dogs generally only live months following diagnosis, but with medication, they can live years and even reach normal life expectancy with fairly normal exercise tolerance.

There are several forms of cardiomyopathy, the most common being dilated cardiomyopathym, which is a heart disorder where the heart muscle weakens and becomes thin.

The heart is too weak to contract sufficiently to push out enough blood and becomes too full, causing the chamber of the heart to enlarge.

This condition is most common in medium to large breeds, including Boxers, Great Danes and Dobermanns. The symptoms are the same as mitral valve endocardiosis.

The same three drugs are used, but in different doses, although the medication to strengthen heart contractions is used from the onset.

Dogs with cardiomyopathy may also collapse or faint, which is associated with an irregular heartbeat or skipped beats. Medication assists to control all the symptoms.

How is a dog diagnosed with a heart condition? Firstly, the vet will speak to the owner to determine the dogs history, then examine gum colour, pulse quality and heart rhythm. Some heart conditions include the symptom of an irregular heartbeat.

Heart conditions may be congenital (of which some are inherited) or acquired (which develop as the dog grows older). Listening to the heart with a stethoscope can also detect heart murmurs, and these murmurs are graded from one to six. While a murmur indicates a heart condition, not all will progress to heart failure.

Diagnosing an exact heart condition is complex, as all heart conditions present similar symptoms, but the range of tests now available has taken away the guesswork.

Tests include an X-ray (radiograph) to view the heart, electrocardiogram (ECG) to detect irregular heartbeat, and, by far the greatest innovation in heart disease diagnosis in recent times, the echocardiogram, an ultrasound examination of the heart.

Heart medications recommended by vets generally need to be administered at least twice daily for the rest of the dogs life.

A low-salt diet is recommended to decrease blood volume, so the heart does not have to work as hard. Prescription low-salt diets are available. Some vets also recommend Omega-3 fatty acids and herbs, which may improve heart health.

Studies at the University of Californias School of Veterinary medicine show the exploration of the deficiency of amino acids in a dogs diet, including taurine and L-carnitine, as being a contributing factor in some cases of cardiomyopathy. (For more information on this theory, visit www.vetmed.ucdavis.edu)

Also a major cause of dog heart disease and more common in Australia’s northern states, is heartworm.

The worm is spread by mosquito bites and grows in the main blood vessels leaving the heart, causing it to become clogged. Symptoms are the same as other heart problems fatigue and coughing.

Heartworm treatment for advanced infestation is risky. However, unlike other canine heart conditions, heartworm is preventable by regular oral medication or an annual injection.