Deafness: The Sound of Silence 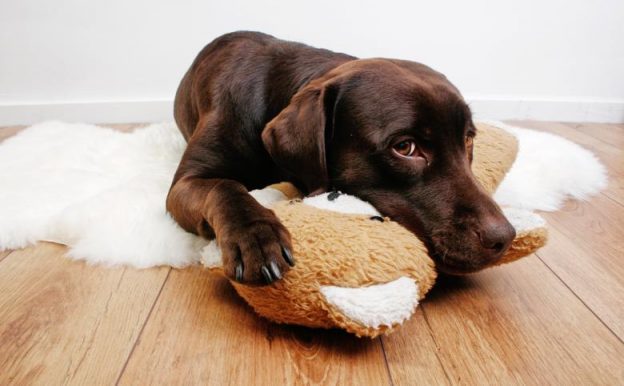 Deafness is common in dogs and in many cases cannot be reversed. Caroline Zambrano finds out which breeds are prone to hearing loss and how to live with a deaf dog.

Ivy is a special dog for many reasons. A mix of enchanting beauty and loving personality, the two-year-old blue-eyed Great Dane cross is a rescue from Fetching Dogs charity — a “foster failure”, in fact — quickly capturing the heart of the Stone family in Sydney. More importantly, Ivy is completely deaf.

“We believe that Ivy’s hearing loss is due to poor breeding,” says owner Julie Stone. “She also lacks pigment around her eyes, her ears and on her nose, which is an indicator of possible deafness.”

Being a special education teacher, Julie is familiar with using sign language so taking on a deaf dog and teaching her signs wasn’t such a daunting idea. But raising Ivy was a little harder than she’d imagined. “It was challenging to find the right motivator for her for training,” she says.

The Stones also have a second rescue dog from Fetching Dogs — a two-year-old Staffy cross named Morgan. “Having two dogs can bring its own challenges, but luckily, Morgan and Ivy get along well 99 per cent of the time,” Julie says. “They are inseparable, sleeping together all the time curled up on their bed, playing and running together.”

The main difficulty with caring for Ivy, however, is recall. “Ivy is a dog that shouldn’t be allowed off-lead — it is too dangerous. She could easily be hit by a car. It just isn’t worth the risk,” says Julie.

Julie says some advantages to Ivy being deaf include being able to walk past barking dogs without her reacting because she cannot hear them. She also doesn’t get distressed by sirens or fireworks because she can’t hear them.

Ivy may not be able to hear, but that doesn’t affect her relationship with her family in the slightest. “Ivy is extremely affectionate. She adores the children and has a very strong bond with our 12-year-old daughter,” says Julie.

Is deafness common in dogs?

Deafness is common in dogs and can present in different forms:

“The most common forms of hearing loss are ‘congenital sensorineural’ and ‘late-onset acquired sensorineural’ deafness,” says veterinarian Dr Susan Sommerlad, an adjunct research fellow in the University of Queensland’s School of Veterinary Science. Having founded an audiological testing service for congenital and acquired deafness in dogs (and cats), Dr Susan provides clinical audiological facilities and researches hereditary deafness in dogs in a number of locations in Queensland.

“Congenital Sensorineural Deafness (CSD) gives complete hearing loss in the affected ear,” she explains. “It is a significant problem in up to 100 dog breeds, including working breeds, and can affect both ears or one ear, which is difficult to spot. If even one ear is affected, a dog cannot work properly as it cannot localise the sound.”

“As we see a rise in popularity of some breeds, such as the French and English Bull Dogs, an increase in breeding means that we see an increase in the numbers of deaf dogs,” she says. The late-onset sensorineural deafness (called Presbycusis) is often a partial hearing loss until it may progress to complete deafness. It is not breed specific and is age-related — very common in older dogs as in humans.

“Other causes of late-onset sensorineural deafness are various medications, excess noise or head trauma,” says Dr Susan. “Dogs can also suffer from conductive deafness associated with problems in the outer and middle ear, such as tumours, infections or glue ear, the latter particularly in Cavalier King Charles Spaniels.”

Unfortunately, if a dog is born deaf, the hearing loss is irreversible. But if the deafness is due to inflammation of the outer, middle or inner ear, treatment is available with medical or surgical options depending on the extent of disease.

“Cochlear implants (hearing aids) have not been used for dogs with sensorineural deafness because they are not practical due to the likelihood of external damage to the implant. It is also a very expensive option,” she says.

However, bone-anchored hearing aids have been used successfully for conductive deafness. In fact, Dr Susan was first in the world to perform the procedure! “After the salvage surgery needed for bilateral chronic ear infections, ensuing conductive deafness can be treated by the use of a surgically placed bone—anchored hearing aid. However, this is very expensive,” says Dr Susan.

“The Australian National Kennel Council (ANKC) invests in canine health research, breed improvement schemes and responsible breeding practices. As currently no DNA test is present for CSD, the only way to discover if a puppy is deaf is with Brainstem Auditory Evoked Response (BAER) testing, a painless electrophysiological test that is performed on puppies from six weeks of age.”

The only way to reduce the prevalence of deafness is by BAER testing all dogs in susceptible breeds before they are bred from, as well as all puppies at about six to eight weeks of age before they are sold, says Dr Susan, adding that some breed clubs, such as Australian Cattle Dogs, Bull Terriers and Dalmatian clubs, do encourage this.

Dr Susan also suggests using breed registers for hearing status to help reduce the prevalence of canine deafness. “The control of unregistered breeding of dogs is slowly coming into effect, but there is a long way to go with policing this,” she says. “Also, breeding for pale coat colours that are unrecognised by the ANKC in breeds like the French Bulldog leads to a higher prevalence of CSD.”

The only way to reduce the prevalence of hearing loss at present is through BAER testing of parents and refraining from breeding with dogs that are deaf in one or both ears. “It is most important that you do not breed your dog if it is deaf, as this condition is almost certainly inherited in most breeds and any offspring have a far greater chance of being deaf than if normal hearing dogs are bred. Even if your dog is deaf in one ear, any offspring would be up to 14 times more likely to produce deaf puppies,” she says.

“Breeders of susceptible breeds should be BAER testing their puppies before they are sold. If you BAER test your puppy and it is diagnosed with hearing loss, inform the breeder of the test results and send a copy of the certificate and tracing for their use. Other pups in the litter may be deaf in one or both ears.”

Living with a deaf dog

Deaf dogs can lead a happy life — they just need to be managed carefully to avoid possible injury to themselves or to others. “They must be kept in a completely fenced dog-proof environment,” says Dr Susan. After all, a deaf dog cannot hear an approaching car! The owner is also legally liable for any accident caused by their deaf dog, she warns.

“Owners report that their deaf dog becomes more reliant on sight and become very sensitive to vibrations,” she says. “The dogs often like to be within sight of the owner or other dogs. They may play in a boisterous fashion with their litter mates or other household dogs as they do not pick up on the auditory warnings given out.”

It is possible to teach a deaf puppy hand signals to assist with instructions, and the use of a light source in dim light can help with training, says Dr Susan. “The use of a vibrating (not shock) collar with a remote control can help with training and getting your dog’s attention,” she adds. “It’s also a good idea to get a dog tag and a harness that reads ‘deaf dog’.”

When it comes to Ivy, Julie has taught her a number of signs to communicate with, including okay to release her from a command (ie sit, wait), sit, drop, shake and come. “Ivy is a strong puller when on the lead, so she needs a pat or a treat reward instead of just a verbal praise,” Julie says. And when it’s time for Ivy to leave the dog park, Stone doesn’t waste her breath calling for her. She sends Morgan to fetch Ivy instead!

“We tell Morgan to ‘go get Ivy’ and she will round her up for us and then we reward Morgan and Ivy with a treat for returning to us,” she say. Good girls!

“Breeding dogs deaf in just one ear can increase the likelihood of producing deaf puppies by up to 14 times!” — Dr Susan Sommerlad, Canine hearing loss expert

How can you tell a dog is deaf?