DogsLife · Dogs News · Why is there Aggressive Behaviour in Some Dogs?

Why is there Aggressive Behaviour in Some Dogs? 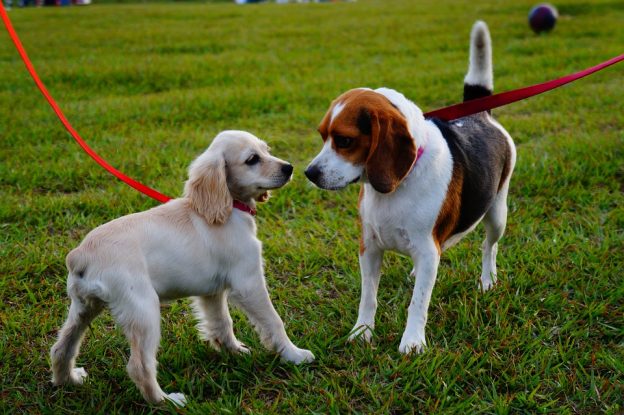 Dogs with problem behaviour can be a danger to themselves and others. Kristie Bradfield discovers how rehabilitation can help them live happier lives.

As a dog owner, you’ve probably had a few encounters with threatening or antisocial canines. You know the type: the minute you step into the dog park, they accost you with unbridled energy and gnashing teeth and they pay your dog a little too much in-your-face attention. Or perhaps it’s your dog being a little too much to handle. Regardless of the scenario, aggressive dogs can be difficult to deal with.

We want our dogs to thrive in social situations, but sometimes getting to that point means admitting we need help. So how do we help dogs that exhibit aggressive and threatening behaviours?

Environment plays an enormous part in a dog’s development, just as it does for humans. Trainer Brydie Charlesworth says the environments that foster bad behaviour in dogs generally fall into two types. “First, we have dogs that are typically ‘yard dogs’, which means they don’t really live in the family unit,” she says. “They are left to their own devices with very little or no training, no socialising and little or incorrect interaction from owners.”

Believe it or not, the second type of environment is your everyday, average family home. Even though the owners shower their dog with love and attention, they just don’t have the knowledge or skills needed to raise a balanced, social dog. “In this case, the dog hasn’t been heavily socialised or habituated in their critical periods and don’t have continued social exposure, guidance or regular training,” Brydie says. “Often, there is a misguided belief that these dogs will ‘grow out of the behaviour’. Dogs don’t grow out of aggression, they grow into it.” The trainer says she often finds that fear underlies most cases of aggression and antisocial behaviour, and it often occurs after a dog has been attacked by another dog.

There are some people who believe that problem behaviour is so ingrained in the troubled dog that there is no hope for rehabilitation, but Brydie strongly disagrees. “Most dogs are capable of change, just like we are. Once placed the correct environment and given training, they can be brought around and be a social, happy part of our community,” she says. We exist in a throwaway society and the dog trainer has seen evidence of this in the way some problem canines are handled by their owners. For some people, it’s just easier to abandon the problem rather than address it. “Our dogs deserve better,” she says. “More education is needed around this as countless dogs are destroyed every year for displaying aggressive behaviour when, underneath it all, the dog is frightened and needs our help.”

Problems at the dog park

Our dogs trust us implicitly to keep them safe. Never has this been more important than when they are on leash. A lot of socialising happens at the local dog park and it can be the scene of some pretty intense behaviour that even the most well-adjusted dogs can struggle with. Even if your dog has never displayed aggressive or antisocial behaviour, owners must always be alert and aware of what is happening around them. “The owner should never allow another dog to run up to theirs while it is on lead,” Brydie explains. “The fight-or-flight instinct kicks in, the leashed dog cannot run and this sets it up for instant failure. Your dog won’t know the intent of the dog that is rushing it and it’s guaranteed to start a fight. If your dog cannot trust that you will keep it safe, aggressive or anti-social reactions may happen or continue to happen.”

It’s not easy to rehabilitate aggressive canines. Dogs that display problem behaviour need strict management strategies that take place in a safe environment. The success of the rehabilitation effort is reliant on so many different variables, none more important than the level of commitment of the family. If one link in the chain of support falters, the rehabilitation effort could fail, as Brydie explains, “The owner needs to understand that they have a high-needs dog and letting Fido off the lead for a run in the park just isn’t possible in the beginning. It may take time to achieve a balanced and social dog.”

While the process is different for each dog, Brydie says most problem dogs would initially go through a desensitising and counter-conditioning process followed by general obedience training. The amount of time it takes to work through the rehabilitation process is dependent on the severity of the condition.

“One of the biggest misconceptions is that the dog just needs to be around other dogs and it will learn that other dogs are great, so [the owners] take their dog to the dog park,” Brydie says. “It’s exactly like taking an arachnophobic person into a room full of spiders and expecting them to find that spiders are friendly. It won’t work. If you own a dog that is displaying signs of aggression, you need to see a trainer. The sooner you address the issue, generally, the easier and quicker it is to fix.”

There is no one-size-fits-all approach to correcting problem behaviour. The amount of work involved in the process varies from dog to dog and is reliant on factors including how long the behaviour has been happening and how dedicated and supportive the dog’s owners are. Brydie knows that one of the biggest hurdles facing owners of problem dogs is the stigma that comes with the label and how paralysing that can be. “These owners need lots of support and encouragement and to know they aren’t alone in this,” she says. “Often, owners are so embarrassed about their dog’s behaviour and avoid taking them out and, therefore, the behaviour gets worse the next time they attempt it. It’s a vicious circle.” It’s important for those owners to know that help exists.

Are you worried about your dog?

If your dog displays aggressive behaviour, it’s important to seek professional advice as soon as possible. Doing this ensures your dog is also checked for any medical causes of the behaviour.

How to respond to an aggressive dog

If you spend a lot of time outdoors with your dog, you may occasionally come face to face with an aggressive canine. The way the situation unfolds rests on your reactions. Not sure what to do? Follow these simple steps:

How to approach dogs safely

Not all dogs are comfortable with attention from strangers. If you’d like to approach a dog and his owner, follow these tips: